NETWORK Rail’s £6.5bn Thameslink project to upgrade the north-south route through London has moved a step nearer completion with the installation of new track and signalling between London Bridge and Blackfriars which will allow this section to reopen in May 2018. 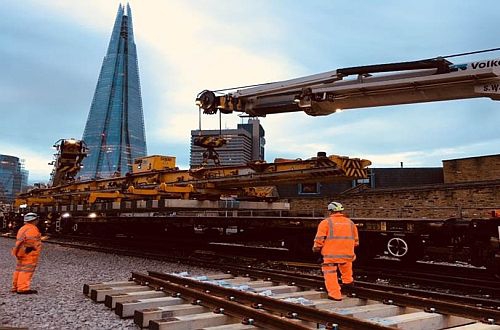 Tracklaying underway to the west of London Bridge towards Blackfriars.

With the completion of this final section of track to the west of London Bridge, the tracks are now in their final position through the station, waiting commissioning of signalling during a 10-day period between December 23 and January 1. During this time major re-signalling will take place around London Bridge and the final section of the new concourse and final five new platforms will open.

Once drivers have been trained and familiarised with the new section of track and its signalling, Bedford - Brighton Thameslink services will be able to serve London Bridge for the first time since January 2015 allowing journey times to be cut and service frequency to be increased.