The line will benefit from new and refurbished trains with CAF also awarded a contract. 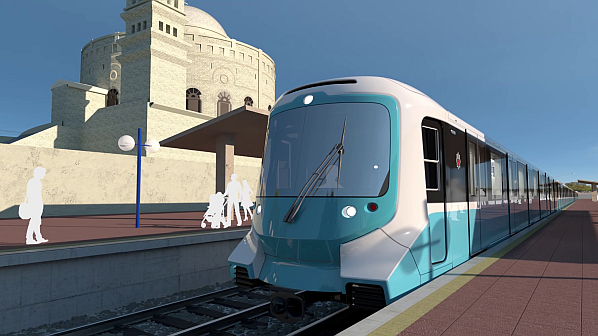 EGYPT’s National Authority for Tunnels (NAT) has awarded Alstom an €876m contract for the supply of 55 nine-car Metropolis EMUs as well as an eight-year maintenance contract for the upgrade of the 44.3km Cairo Metro Line 1.

Alstom will design and build the trains at its Valenciennes Petite-Forêt facility, with bogie construction and motor integration undertaken at the Le Creusot site. Passenger information systems will be produced at the Villeurbanne facility while the electrical engineering will be supplied from the Toulouse factory.

Alstom will also supply its HealthHub predictive maintenance system as part of the contract which it says will save up to 20% in preventative maintenance labour and 15% in materials consumption. Maintenance will be conducted at a depot in Cairo and will be managed locally which Alstom says will create jobs. A training and development plan will be rolled out in partnership with the Egyptian Company for Metros (ECM) which operates and maintains Line 1.

The French government is providing the finance for this, and a further nine associated projects, with the final financing total around €1.8bn. This was agreed on June 13.

NAT has also awarded CAF a €180m contract to refurbish 23 trains currently operating on Line 1 and the new Kozzika maintenance depot. Maintenance of the trains for two years is also included in the contract, which is being financed by Spain’s Enterprise Internationalisation Fund (FIEM).

The refurbishment, which will be completed in partnership with Mitsubishi Corporation includes upgrading the traction system under CAF Power and Automation integration, installing air-conditioning and improving the aesthetics of the trains, which were built by the Japanese company. The work will be carried out at the Kozzika depot, which will also be fitted out by CAF.

For detailed data on rail projects in Egypt, subscribe to IRJ Pro.