The 30-year agreement with Trafigura, Mota Engil and Vecturis was announced in July. 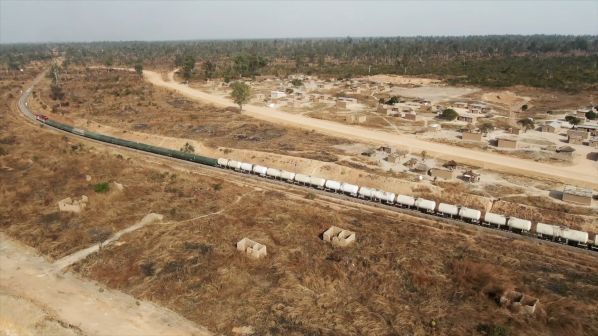 THE Angolan government has signed a 30-year concession with a consortium of Trafigura, Mota-Engil Engineering and Construction Africa, and Vecturis, Belgium, to operate rail services and offer logistical support for the Lobito corridor, which runs for approximately 1290km from Luau on the eastern border with Democratic Republic of Congo to Lobito Port on the Atlantic Coast.

The agreement with the European-based consortium was announced in July and the group confirmed that it will take over responsibility for the concession “when the conditions precedent of the agreement are met in the months ahead.”

The consortium will be responsible for the operation, management and maintenance of the 1067mm-gauge rail infrastructure for the transport of goods, minerals, liquids and gases. The consortium has agreed to invest “significant capital in improving the capacity and safety of the corridor” as well as invest in rolling stock for operation. It confirmed that it will spend $US 100m in the initial concession premium, $US 170m for infrastructure, and $US 170m for rolling stock. The concessionaire will pay $US 319.4m to the Angolan state in the first 10 years of the contract, $US 787m in the second 10 years, and $US 919m in the final 10 years.

The concessionaire will construct freight terminals in Lobito and Luau. It will also manage and expand workshops for the line along with the staff training centre in Huambo, which opened in 2017. In addition, the concessionaire has the right to use and operate the new mineral terminal in the port of Lobito. Under the contract, it will be required to o transport 1677 million tonnes of freight per year by the fifth year of the concession. This will rise to 2982.31 million tonnes by year 10, while static figures of 4979.23 million tonnes are provided for years 20 and 30 of the agreement.

The consortium is expected to create 1600 jobs in Angola. Trafigura and Mota-Engil both hold 49.5% stakes in the consortium and Vecturis 1%, reflecting their financial contribution. Vecturis will receive a fee for operating the railway while Mota-Engil will be responsible for infrastructure maintenance as well as execution of any works on the line. Trafigura will work on commercialisation.

An in-depth article on the Lobito corridor revival project appeared in the August 2022 edition of IRJ. Digital subscribers can read it here.