ARCELORMITTAL Liberia (AML) took delivery last month of six additional ES44AC locomotives from GE, which will supplement the existing fleet of three GE units and enable the operation of 140-wagon trains on the 243km line linking the Tokadeh iron-ore mine with the port of Buchanan. 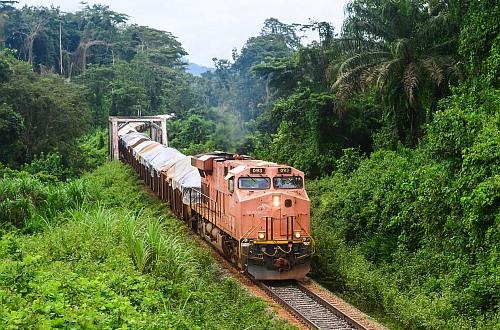 With the delivery of the 3.3MW locomotives, the number of departures from Tokadeh will be increased to 10 trains a day. The investment in new locomotives is part of AML's plan to increase iron-ore exports from Buchanan from five million tonnes to 15 million tonnes per year.

In preparation for the ramping up of its rail operations, AML is training 18 Liberian drivers, taking the total number of drivers on the line to 34.

The former Lamco railway ceased operating in 1992 during Liberia's prolonged civil war, but following the end of hostilities and the reopening of the Tokadeh mine the line was reactivated by AML in May 2011.

Further details of the revival of the railway in Liberia can be found here.