Will Costa Rica’s grand electric railway plans get over the line?

Costa Rica is pushing ahead with projects to revive and extend its freight railways. However, plans to build a new 84km electrified passenger railway in the country’s central plateau are at a crossroads, as Ron Buchanan explains. 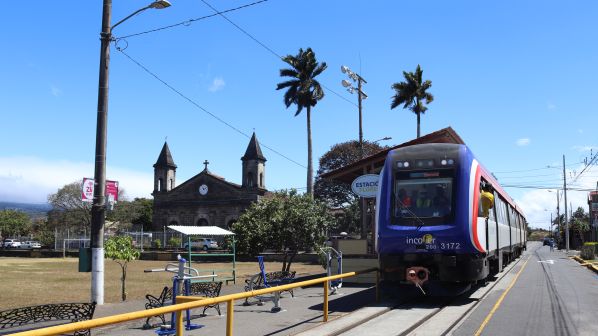 Incofer plans to redevelop the 353km San Jose suburban network which was largely closed in the 1990s.

COSTA Rica is the latest country to join the Organisation for Economic Co-operation and Development (OECD), a remarkable achievement for a nation of five million inhabitants from a particularly volatile area of the world.
However, a key infrastructure scheme and campaign promise of president, Mr Carlos Alvarado, who was elected in 2018 - a $US 1.55bn electrified railway - has become a national bone of contention.

For a start, the cost is very high for a small country facing a pandemic that has crushed the tourism industry on which the economy largely depends. Yet the need is very real. Traffic in the metropolitan area of Costa Rica’s capital San José is appalling.

What Americans call gridlock, Costa Ricans refer to as “dams” in the sense that they block rivers of buses, cars and taxis. Frequently, the dams burst into havoc impacting the Central Valley, the heartbeat of the country’s commerce and industry and most populated area. Many feel that a new railway will help ease this situation.

State-owned railway, Incofer, currently operates a limited suburban service on three routes around San José to Heredia, Alajuela and Cartago. However, it has significant plans to redevelop the 353km, 1067mm-gauge network, which was largely closed in the 1990s. Eight new DMUs bought from CRRC Qingdao Sifang were introduced at the end of April. The trains have capacity for 372 passengers, double that of legacy trains, and offer emissions reductions of 90% compared with these sets.

With the country facing hard times due to the pandemic, dissent against the project is growing among the political opposition.

The railway is currently working on platform upgrades at various stations across the suburban network and improving its depot at San José. It also has plans to upgrade the freight line between San José and Puntarenas on the Pacific coast, awarding Korea National Railway (KRNA), Dong II Engineering and Soosung Engineering a feasibility study contract to revive the 98.3km line in February.

In addition, Alvarado announced plans to develop the Limón Electric Freight Train Project (Telca) in December 2018, which will connect with the key Caribbean container port of Moin and be used to transport goods such as pineapples, coffee and medical instruments, with a future link to Nicaragua envisaged.

The first stage of this $US 450m scheme involves refurbishing and electrifying the 60km Valle de la Estrella - Limón and 109km Limón - Moin - Río Frío sections. The second stage involves extending the line by 30km from Río Frío to Chilamate de Sarapiquí, which will require Incofer acquiring rights of way. A third stage is envisaged to extend the line by a further 42km from Chilamate to Muelle de San Carlos. The line will require the construction of 250 bridges, including a 466m span across the Chirripó river, the longest in central America, and 150 culverts. The projected budget includes electrification and rolling stock.

Studies for the project are divided into two phases and are funded by the Central American Bank of Economic Integration (Cabei). A Spanish-Mexican engineering consulting consortium of Audingintraesa and Audingmex was awarded a $US 750,000 contract in November 2018 to conduct the first study of the Valle de la Estrella - Río Frío section. It was also awarded a $US 916,000 contract to study the 42km Río Frío - Muelle de San Carlos section by Cabei in July 2020. Results of both studies are expected in the second half of this year.

Alvarado said in June that it is his intention for the project to be funded and ready to proceed to tender and construction at the start of the next government administration, which will take office after next year’s election.

The centrepiece of Costa Rica’s new railway developments is Alvarado’s pledge to build a new 84km double-track electric railway in the Central Valley between Paraíso de Cartago, San José, Heredia and Alejuela. The project is divided into five lines: Line 1 (Paraíso - Atlántico), Line 2 (Atlántico - Alajuela) and Line 3 (Atlántico - Ciruelas), all of which will operate independently in a continuous circuit in the western section of the network, improving connectivity between San José, Heredia, and Alajuela. Line 4 (Alajuela - Ciruelas) and Line 5 (Ciruelas - El Coyol) are respective extensions of lines 2 and 3 and will use Incofer’s right of way to connect to the suburban lines in Alajuela to extend the service to the Coyol area, an area of the country experiencing continuous growth and expansion.

The network will consist of elevated, at-grade and underground sections in urban areas, and have 46 stations, 10 of which will be multimodal hubs. Incofer estimates the need for 78 five-car trains, which can operate in multiple, and will each have capacity for 400-600 passengers. The 70m-long trains have anticipated maximum speed of 25km/h in urban areas, 50km/h in semi-urban areas and 70km/h in interurban areas, indicating that Incofer favours LRVs. These trains are expected to run for 18 hours a day and at up to five-minute headways during peak times on lines 1, 2 and 3, carrying an estimated 200,000 passengers per day and 50 million per year.

Alvarado, who is in the final year of his administration, has promised to issue a preliminary tender for the project. A concession model will be used whereby the private sector will be responsible for the design, construction and operation of the system. Cabei has also promised a $US 550m loan as a kick-starter, which is awaiting approval from the Legislative Assembly. A $US 250m, 40-year loan from the United Nations Green Climate Fund, was confirmed on July 1, which will finance part of the $US 550m Cabei loan, improving conditions. The remaining $US 1bn is expected to come from foreign direct investment.

Cabei encompasses 15 members comprising Central American countries, along with some of its neighbours including Mexico and Colombia, as well as Taiwan and South Korea. In a recent interview, Mr Dante Mossi, Cabei’s executive president, said confidence in Costa Rica’s rail project was such that support was forthcoming from all the member countries for the $US 550m loan, “the largest ever approved by the bank.”

However, with the country facing hard times due to the pandemic, dissent against the project is growing among the political opposition.

The government’s critics argue that the current crisis is the result of years of feather-bedding enjoyed by the state bureaucracy, coupled with the Covid-induced crisis in tourism. The difficult situation was emphasised earlier this year when the International Monetary Fund (IMF) launched a $US 1.8bn rescue package to save the Costa Rican economy from a potential collapse. Thus, while membership of the OECD has raised Costa Rica’s influence in the international financial community, Alvarado’s opponents argue that the project is too expensive in the current climate.

“You have to set priorities,” said Mr José María Figueres, who currently leads the political opposition, in a recent interview. “Life is like that. You can’t do everything at the same time. First, we have to get the economy back on track. The train must wait.”

Not everyone, however, shares that view.

Certainly not Ms Claudia Dobles, the nation’s First Lady who, before her marriage to Alvarado was, perchance, the director of Incofer.

Dobles is spearheading Costa Rica’s National Decarbonisation Plan, which with the country’s electrical grid already running on 98% renewable energy, is targeting reductions from transport, which accounted for 51% of the country’s total in 2015. The railway is estimated to avoid 1.8 million tonnes of CO2 in the first 30 years of operation. Indeed, the new railway is the centrepiece of plans to create a multimodal transport network, which will also include electric buses, walking and bicycle paths.

The aim is to consult a group of 10 experts in public works and with experience from projects in Bogotá, Panamá, Quito and Lima. “This technical review will be able to provide us with more accurate costs and possibly reduce our estimates for the project,” Dobles told the daily La República.

Previous studies of the project have projected net benefits of more than $US 3bn, ranging from the benefits in journey time savings, reductions of environmental and noise pollution, and traffic accidents. Whether the review will provide the answers the government is looking for remains up for debate. Alvarado ultimately hopes the project will serve as a stimulus to the country’s recovery from the pandemic - construction is expected to create 1200 jobs and 1500 people would be employed when it opens. Mossi also remains optimistic.

“We certainly don’t want to throw in the towel on this one,” Mossi says. “We’re simply hanging on for Costa Rica’s sovereign decision on all of this. Whatever it is, we’ll respect it.”