Arriva will replace Keolis on the Zutphen - Hengelo - Oldenzaal route. 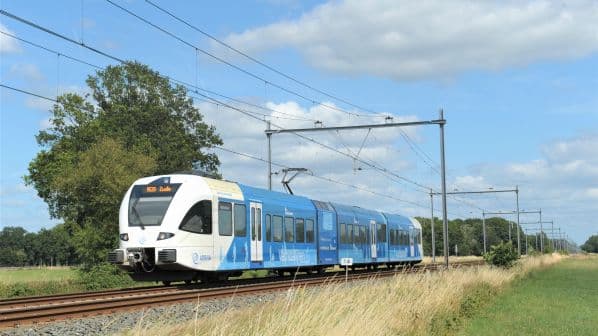 Like other Arriva rolling stock deployed on Blauwnet services, the Lint DMUs will carry this blue and white livery.
Photo Credit: Quintus Vosman

THE provinces of Overijssel and Gelderland have awarded Arriva Nederland the concession to operate Blauwnet regional services on the route from Zutphen in the eastern Netherlands to Hengelo and Oldenzaal on the German border.

The contract is worth €300m and will see Arriva replace Keolis as operator of this route in December 2023, involving the transfer of 450 employees. Contract term is four years with an option for a 12-month extension.

Arriva will also take over a fleet of nine Alstom Lint 41/H DMUs from Keolis. The regional public transport authority for Overijssel province says that the fleet will be refurbished and equipped with onboard Wi-Fi, a compartment where passengers can work and a new toilet which will be accessible to passengers with reduced mobility.

Both Overijssel and Gelderland are working to make public transport more sustainable, and the regional public transport authority has announced that the new concession will make provision for this.

It is expected that new rolling stock, and battery EMUs (BEMUs) in particular, will replace the Lint 41/H DMU fleet at the end of the new concession. For this reason, the concession term of four years matches the remaining expected working life of the Lint DMUs, which were built in 2001.

Arriva Nederland has been very successful in recent tenders and is now by far the biggest operator of regional passenger services in the Netherlands.

The remaining minor portion of the regional network is divided between four other operators, with Keolis retaining the Zwolle - Kampen and Zwolle - Enschede routes, operated as part of the Blauwnet network under a concession awarded by Overijssel.

Transdev operates the Valleilijn from Amersfoort to Ede Wageningen under a concession let by Gelderland. Under concessions awarded by the province of South Holland, Qbuzz operates the Merwedelingelijn from Dordrecht to Geldermalsen, and Netherlands Railways (NS) the Alphen aan den Rijn - Gouda route.