THE African Union (AU) is seeking private investors to support an upgrade of the 1000mm-gauge single track Dakar - Bamako line to improve connectivity and boost trade between Senegal and landlocked Mali. 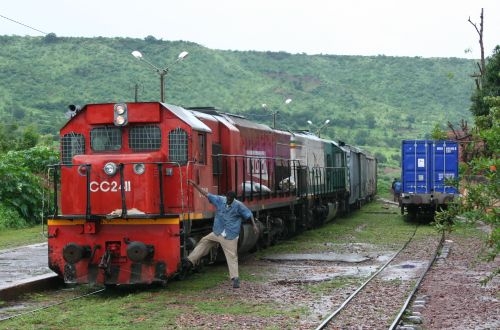 A freight train from Senegal arrives at Kati, near Bamako, in September 2010.
Photo Credit: Thomas Kautzor

The upgrade entails investment in new track to convert the 1000mm-gauge line to standard gauge, as well as rolling stock, and signalling on the 1128km line. China International Railways, China Railways Corporation Construction and Sahara Mining, India, have expressed interest in financing the project.

The upgrade is expected to cost $US 3.1bn and Mr Ibrahim Mayaki, CEO of the New Partnership for Africa's Development (Nepad), an AU planning and coordination technical body, told heads of state and government during a meeting in Addis Ababa last week that the project is one of 16 infrastructure undertakings which have been developed and are "now bankable."

Operations on the line, which was initially operated by Transrail before it was acquired by Belgium's Vecturis, ceased in 2010. It is part of the Dakar - Djibouti railway, which will be extended southwards from Djibouti to Libreville, under AU plans.

The 16 infrastructure projects are being developed under the Programme for Infrastructure Development with an estimated cost of $US 68bn by 2020, with an additional $US 300bn investment envisaged up to 2040.