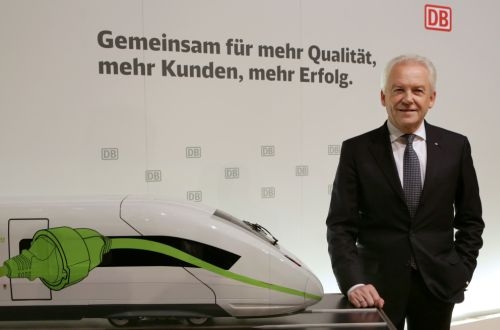 "A critical look at our performance shows us that we did not achieve the targets we had set," CEO Dr Rüdiger Grube, says. "We also failed to reach the quality target we had set for ourselves for 2015. In the face of ever fiercer competition, each of our business units will need to make major strides in terms of quality.

"The 2015 fiscal year was also impacted by three other key developments," Grube says. "Last spring, we at DB saw, first of all, the longest strike in the history of our company, and second, unusually fierce storms with a far-reaching impact on rail operations. In the autumn, we also faced the great responsibility of transporting hundreds of thousands of refugees."

Dr Richard Lutz, DB's CFO (pictured below), says the overall cost of the strikes and storms was €370m. He says the loss after tax reflects a €1.7bn adjustment to DB's financial position and precautionary measures connected with restructuring. "Accordingly, the result for the year as a whole was negative for the time since 2003," Lutz explains.

DB Cargo (formerly DB Schenker Rail) had a tough year in 2015 with a 4.3% drop in tonne-km to 98 billion, a 3% reduction in revenue to €4.7bn, and a €229m fall in adjusted Ebit which turned a surplus of €46m in 2014 into a loss of €183m last year. "Many customers signed long-term agreements with other carriers during the strike, and our rail freight revenues are still down 8% to 10% as a result," Grube explains. "We are doing everything we can to encourage former customers to return and also to recruit new customers."

DB's international passenger subsidiary DB Arriva performed well with a 1.4% increase in revenue to €4.5bn or €4.8bn after adjustments, and ended 2015 with an adjusted Ebit of €270m an increase of €5m over 2014.

DB expects turnover to exceed €41.5bn this year. "We see signs of growth – as in 2015 – primarily at DB Arriva and DB Schenker, but we expect the revenue trend to weaken somewhat based on our assumption of negative exchange rate effects in 2016," Lutz says.