NTV to be listed on stock exchange in 2018

THE chairman of Italy’s open-access high-speed rail operator NTV, Mr Luca Cordero di Montezemolo, has confirmed that the company will launch an initial public offering (IPO) on the stock exchange in 2018. 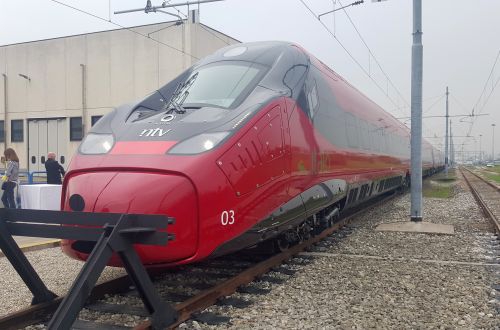 The first NTV Evo Pendolino train on show at Expo Ferroviaria in Milan.

NTV was set up by a group of private investors in December 2006 and launched its first high-speed services on the Rome - Milan route in April 2012, with full deployment of its €600m fleet of 25 Alstom AGV trains on the Italian high-speed network a year later.

However, NTV struggled to reach breakeven due to the poor state of the Italian economy and stiff competition from state-owned incumbent Trenitalia. In September 2015, NTV restructured its debt and had a €60m equity capital injection. A month later NTV awarded Alstom a €250m contract for the supply of 12 Pendolino Evo trains, the first of which was unveiled in Milan on October 3. This will allow NTV to introduce a new service on the Turin - Milan - Verona - Venice corridor next year.

A second debt restructuring was undertaken in June with the issue of a €550m bond, the arrangement of a €140m loan and a €20m revolving credit facility, and the entry of a new shareholder.

NTV announced changes to its senior management in September following the resignation of its chairman, Mr Andrea Fragalli Zenobia, for personal reasons. Zenobia was replaced by Montezemolo, one of its founders, while Mr Flavio Cattaneo was appointed managing director.