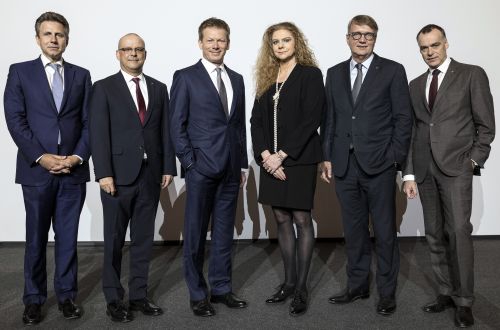 DB’s CEO Dr Richard Lutz, who presented the financial results for 2017 in Berlin on March 22, attributes DB’s “favourable performance in 2017” to passenger growth and better performance outside Germany at passenger operator DB Arriva and freight and logistics subsidiary DB Schenker.

Both long-distance and regional passenger services in Germany recorded a 2.6% increase in passenger-km to 40.5 billion and 42 billion respectively. “More than 142 million people used our ICE, IC and EC trains in 2017,” Lutz says.

“That was more passengers than ever before - and 2017 was the third year in a row to see a growth in passenger numbers. Our new high-speed line between Berlin and Munich is doing particularly well: since the line opened in December, more than twice as many passengers have used our service between the two cities as in the same period a year before. Over a million passengers used the line in the first 100 days.

“DB Regio achieved the highest contract award rate it had seen in the past five years, winning 74% of the total train-km that were put out to tender in 2017,” Lutz reveals.
However, rail freight suffered a 2.2% drop in tonne-km from 94.7 billion in 2016 to 92.7 billion in 2017. Lutz took the opportunity to present DB’s new board member for freight transport and logistics, Mr Alexander Doll, who starts his role on April 1.

DB says the proportion of non-DB operators running trains on the national network increased slightly from 30.1% in 2016 to 30.9% last year.

Lutz says DB is investing more than ever before in the rail network. “Last year, we invested roughly €7.5bn to modernise the network, upgrade existing lines and build new ones,” he says. “This year we are looking at record investment of over €9bn. And despite extensive construction work in 2017, we still managed to lower construction-related delays by 10% year on year.” Gross capital expenditure increased by 10% to €10.46bn.

Referring to long-distance passenger, Lutz says he not happy with this performance. “Our objective was an increase that would benefit our customers,” he says. “Our target for 2018 - average long-distance punctuality of 82% - remains unchanged. Looking at the first few months of 2018, there is no question that we will need to do a lot better, and that we will need to work harder to make Future Rail more energetic and effective.”

Regarding 2018, Lutz says: “we expect to generate revenues of some €44bn and adjusted Ebit of at least €2.2bn. We will also continue to invest in our quality, punctuality and reliability - and in our digital future.”