SWISS Federal Railways (SBB) has announced a loss of SFr 479m ($US 528.5m) for the first half of 2020, down from a profit of SFr 279m over the same period last year, as the effects of Covid-19 saw passenger numbers drop by a third over the period. 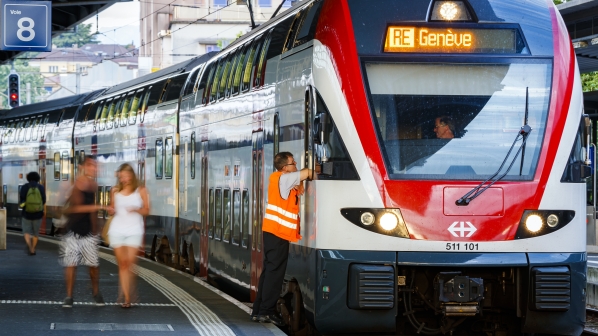 Passenger numbers rose by 4% year-on-year over the first two months of 2020, before dropping sharply in March. SBB maintained its basic train service during Switzerland’s lockdown, but lost around half of its normal passenger revenue in the second quarter.

The regional and long-distance divisions recorded losses of SFr 146m and SFr 261m for the half respectively. The property division recorded a profit of SFr 106m, down from SFr 179m, before making compensation payments to the infrastructure and pension fund which resulted in a loss of SFr 5m.

SBB carried an average of 810,000 passengers a day during the first half of the year, down 37.2%from 1.29 million the year before, while passenger-km fell by 38.4% to 5.93 billion. SBB refunded SFr 100m to passengers with rail passes, and waived or reduced rent for businesses during the lockdown.

SBB’s debt coverage ratio increased to 13.4, well above the federal government’s limit of 6.5, and SBB has initiated a plan to stabilise debt over the next few years. The federal government has also increased SBB’s short-term credit limit by SFr 550m to ensure liquidity, and both parties are in discussions about any further medium-term financing measures required.

SBB is continuing to cover the losses of its commercial long-distance and property sectors.

Cost-cutting measures introduced at the end of April, which include a hiring freeze for the company’s administrative departments, will contribute around SFr 250m by the end of the year and SBB will reduce its investments in IT, energy and innovation. SBB is also postponing some projects, but says rail operation and safety are not affected.

The number of passengers using SBB services revered in June, with loading on long-distance services at 70% compared with the same time last year while regional services were at 80% year-on-year as of the end of June. Almost all passengers have been complying with the government’s requirement for masks to be worn on public transport services.

Accordingly, SBB assumes that the financial situation will ease somewhat in the second half of the year, with federal measures relieving some pressure on the annual result.

SBB says it underestimated the need for drivers in recent years and has not recruited enough staff, with the Covid-19 situation further delaying driver training. This will result in some services being cancelled by the end of the year. SBB says that according to current plans, it will be able to run all planned service from the December 2020 timetable change, except in western Switzerland where certain restrictions will remain in place until April 2021.

SBB Infrastructure posted a half-year loss of SFr 115.4m, down from a profit of SFr 9.6m. The network division’s loss increased from SFr 5.2m in the first half of 2019 to SFr 127m this year, due to the slump in train path yields and productivity losses as a result of Covid-19.

Investment is on budget at SFr 1.099bn despite disruption from Covid-19, but still below the SFr 1.149bn invested in the first half of 2019. Work at most of the temporarily closed construction sites is on track, and SBB is planning to put the Zugersee East route into operation at the end of 2020 while the Ceneri Base Tunnel opened earlier this month.