SWITZERLAND celebrated the official opening of the Ceneri Base Tunnel on September 4, with the first freight train passing through the 15.4km tunnel shortly after 11.30 local time. 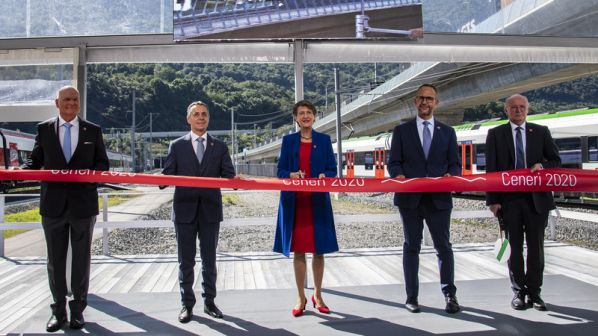 Swiss president, Ms Simonetta Sommaruga, attended the opening ceremony, and praised Swiss voters for backing the project in a referendum held in 1992.

“Monte Ceneri separated many people here in this canton, not only geographically, but also socially,” she said. “Now North and South are coming closer together. Instead of going over the mountain, we can go through the mountain. AlpTransit is the glue that binds our country. And just as the Gotthard has united Switzerland, so will Ceneri unite Ticino.”

The SFr 3.6bn ($US 3.95bn) tunnel between Camorino in the north and Vezia, near Lugano, in the south, is the final section of the Zürich - Milan New Alpine Rail Link (Neat) corridor project. When passenger services commence in December, the tunnel will help to cut journey times between the two cities to less than three-and-a-half hours initially and three hours when improvements on the Italian side of the border are completed. This compares with 3h 40min currently. In addition, the tunnel cuts journey times between Bellinzona and Lugano from 27 minutes to 19 minutes, and Lugano - Locarno from 50 minutes to 29 minutes.

The tunnel was originally due to open in December last year, but this was delayed in 2015 due to a dispute over tendering for the railway systems. It has capacity for 170 freight trains and 180 passenger trains per day.

Sommaruga was joined during the ceremony by federal councillor, Mr Ignazio Cassis and the Ticino state council president, Mr Norman Gobbi, along with the CEO of AlpTransit Gotthard (ATG), Mr Dieter Schwank, and the CEO of SBB, Mr Vincent Ducrot.

“It’s the last part of the puzzle,” Ducrot said. “The goal to have a flat rail line through the Alps has now been achieved.”

Meanwhile, on September 3, Sommaruga and Italian minister of infrastructure and transport, Mrs Paola de Micheli, confirmed that an agreement has been reached to modify the Simplon line between the two countries, so it is suitable for 4m corner height wagons used for piggyback freight transport.

The project is estimated to cost €237.5m and concerns lines on the European corridor from the border at Iselle, near Brig, Switzerland, via Premosello and Arona to Milan; from Premosello via Cressa Fontaneto to Novara; and from Arona via Vignale to Novara.