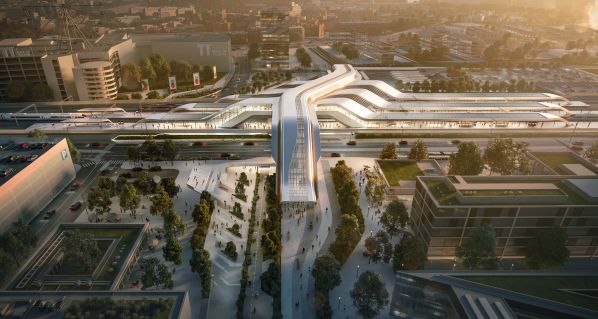 RAIL Baltic Estonia has received a single bid from Rizzani de Eccher to build the Rail Baltica passenger terminal at Ülemiste in Tallinn, which at €346m is double the expected cost.

Responsible for executing the Rail Baltica project in Estonia, Rail Baltic Estonia had called tenders for the construction of the major interchange at Ülemiste, covering 2400m² in total and including a station for 1520mm-gauge services as well as the 1435mm-gauge Rail Baltica route.

Due for completion in 2026, the Ülemiste terminal would also be served by local light rail and bus routes, with the construction contract including railway infrastructure, access roads, car parks and a new public space beneath the terminal.

“Considering the extensive impact of the war in Ukraine on the construction market and price levels, and the uncertainty of international bidders regarding our region, the lack of bids is expected,” says Mr Marko Kivila, chief operating officer at Rail Baltic Estonia.

“We hoped that there would be more offers and more people would be interested in participating in the construction of this landmark project.”

Rail Baltic Estonia reports that over 20 companies registered for the tender, and submitted 450 questions during the tendering process for the Ülemiste construction contract.

“We are dealing with an extremely demanding and large-scale project, the construction of which is financed by EU funds, so in order to ensure the success of the procurement and mitigate the risks, we took a number of preventive steps both before the tender announcement and after taking into account the questions we received,” Kivila says.

These steps included cost indexation to take into account the increase in construction costs, amending the project schedule, simplifying documents and repeatedly postponing the procurement deadline at the request of potential bidders.

With the sole bid of €346m being twice the estimate made before bids were called, the procurement committee is continuing with the tendering exercise in line with procurement rules.

It is also considering other options, which include launching a new procurement exercise and dividing the Ülemiste construction contract into lots, according to Kivila.

Meanwhile, Rail Baltica’s overall project promoter, the RB Rail joint venture, has relaunched tendering for a contact to provide design and design supervision services for the construction of the 65km Kaunas - Vilnius section in Lithuania, to be implemented in cooperation with national infrastructure manager LTG Infra.

“One of our key strategic goals is to ensure healthy and transparent competition in Rail Baltica procurement, constantly developing best practice,” says Mr Marius Narmontas, head of the Lithuanian section of RB Rail.

RB Rail has invited applications to qualify by October 14 and is aiming to complete the first phase of procurement by the end of this year. It is planning to sign the contract in the second half of 2023.

The overall contract will be divided into sections. It will provide for the provision of master design services including site investigation, design proposals, master designs and the obtaining of planning permission. Detailed technical design and design author supervision services will be provided on request.

The double-track 1435mm gauge railway between Kaunas and Vilnius will be electrified, and the construction contact will include the rebuilding of 16km of 1520mm gauge railway and providing three passing loops. It will also cover associated civil structures, such as 13 viaducts, 10 road bridges, eight wildlife crossings and 15 culverts.