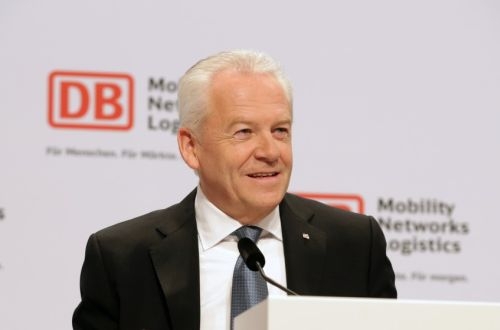 According to DB's CEO Dr Rüdiger Grube, the drop in Ebit was mainly caused by devastating damage inflicted by storm Ela in the early summer, which resulted in €60m in lost earnings, and 165 hours of strikes by train drivers in the autumn, which cost a further €166m. "If not for these two negative factors, Ebit would actually have been up slightly year on year," says Grube.

The strikes and storm damage also affected railfreight which saw a 1.3% decline in tonne-km to 102.9 billion. DB Schenker, DB's road, air and ocean freight and logistics business, recorded growth in all four sectors with contract logistics increasing its revenue by 10.3% to €2bn.

Direct railway investment by DB Mobility increased from €1.5bn to €2.65bn in 2014, while infrastructure investment by DB Networks fell slightly from €61.bn in 2013 to just under €6bn last year. However, DB signed its second performance and financing agreement (LuFV II) with the government last year which means DB Networks will be able to invest €28bn to upgrade the existing network and €7bn in new construction during the next five years. "A modernisation campaign of this size is unparalleled in Germany and Europe," says Grube. "And by mounting this campaign, we are laying the foundation for rail to continue to grow."

Grube says DB has taken a major step towards meeting its ambitious environmental targets. By the end of last year, renewable energy accounted for nearly 40% of traction current. In 2014, DB reduced CO2 emissions by 22.7% compared with 2006, reaching the 20% goal which it set for 2020 well ahead of schedule. "These are important successes, given our aim of becoming an eco-pioneer," says Grube.

Grube says digitalisation of the railway is the biggest challenge in DB's history. "We want to be – and will be – a leader of this development, not a follower."

DB's 2011 budget called for an increase in revenue from €34.4bn in 2010 to €70bn by 2020 with €56bn coming from organic growth and €14bn from acquisitions. However, changes in the market since 2012 and the challenges which DB faces have forced it to revise these figures down. It now expects to increase revenue from organic growth by 2020 to €50bn, while there is now doubt about expansion through acquisitions as Grube says he will not increase debt disproportionately. DB plans to continue to reduce costs with a €600m saving expected from slimming down management.