CHINA has introduced a 160km/h metro train in Guangzhou, the capital of South China's Guangdong Province, which will operate on the under-construction lines 18 and 22. 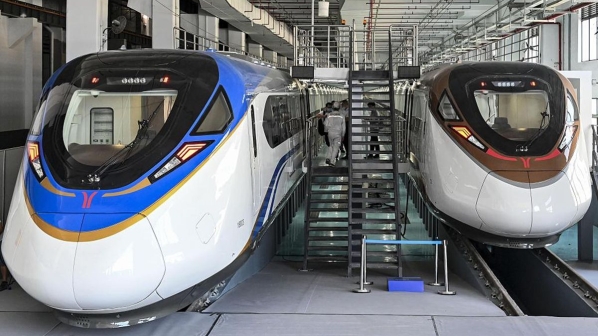 Guangzhou has ordered 40 of the trains from CRRC Zhuzhou Locomotive, comprising 25 for Line 18 and 15 for Line 22, with the remaining trains due to be delivered from next month. Line 18 trains will feature a blue livery, while the Line 22 trains have a gold livery.

The interiors feature wooden accents, lighting that can adapt to the time of day, and passenger information screens.

Once opened, the new lines, which will partially share tracks once completed, will reduce travel times from Nansha Free Trade Zone to Guangzhou South station and Guangzhou East station to 25 and 30 minutes respectively. The fully underground lines have a total length of 90km.

Civil works on Line 18 are 76% complete, with two stations complete. Around 50% of the civil work on Line 22 have been finished, along with four stations.

The lines will be faster than the 120km/h Shenzhen metro Line 11, which was dubbed “China’s fastest metro line” when it opened in June 2016.