DANISH State Railways (DSB) has removed 35 of its troubled IC4 DMUs from service, after a potential flaw in some refurbished brake controls was identified. 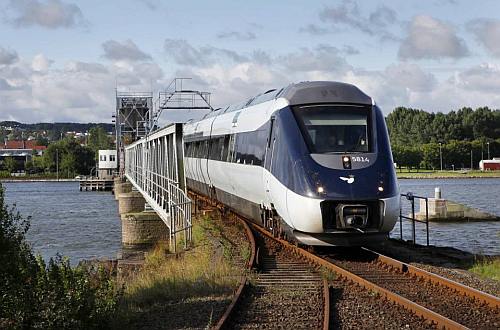 DSB says the supplier of the refurbished drive brake controls has not fixed the gears in the control properly, potentially resulting in them slipping out of position. If this happens, the train can only use its emergency brake.

“It is unsatisfactory that our supplier has not been able to deliver the expected quality,” says DSB operations director, Mr Per Schrøder. “We are in close dialogue to rectify the error on the refurbished drive-brake controls.”

Two cases of brake failure have already been reported and, following inspections and discussions with the contractor, which DSB has not named, it was decided to temporarily remove all 35 IC4 sets with the refurbished drive-brake controls from service.

DSB says it is currently replacing the faulty controls with working controls that it had in stock, while also putting pressure on the supplier to solve the problem.

“It is important for me to emphasise that all the trains have been able to stop at all times - even with the fault found,” Schrøder says. “But by nature we cannot accept that there is potentially a systematic failure in the train’s braking systems.”

The removal of 35 trains from service has resulted in temporary adjustments to DSB’s timetable, primarily on regional routes. These restrictions are expected to be removed as the trains are reintroduced.

The incident is not the first time the IC4’s brakes have caused issues.

DSB ordered 82 four-car IC4 and 23 IC2 two-car sets from Italian manufacturer AnsaldoBreda in 2000 and the first trains were due to enter service in 2003. However, numerous technical problems meant that introduction was heavily delayed.

From November 2011, the operation of IC4 trains in multiple was banned and the maximum speed restricted to 169km/h, and 140km/h during the leaf-fall season in October and November, due to issues with the braking system, even though the trains are certified for operation at up to 180km/h. The restriction was applied after an IC4 overran a danger signal at Marslev on the Copenhagen - Odense line in an area not known for poor railhead conditions. Braking percentages were subsequently reduced from 170% to 130%, which applies the ATC emergency brake earlier, and brakes on one of the axles were isolated to ensure the ATC always takes a safe, accurate position from the reference axle. This limits the operation of the IC4s and was a barrier to the full implementation of the deployment plan.

In December 2016, DSB announced that it will phase out the fleet of IC4 trains in 2024 as electrification enables the introduction of new EMUs.