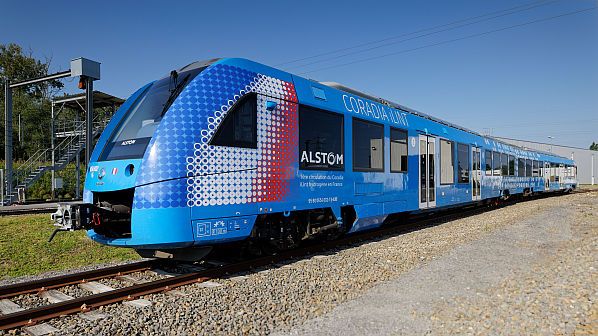 THE first train of what will soon become the world's largest hydrogen-powered fleet has arrived in Germany’s Rhine-Main area for tests.

Alstom will carry out route and refuelling process familiarisation tests with the Coradia iLint 54 multiple-unit, with 27 such hydrogen trains due to run on the Taunus network operated for Rhine-Main Transport Authority (RMV). In late summer, the first new vehicles will be handed over to RMV and more than half of the trains are expected to be in service for the start of passenger operation in December.

The lines are operated by the DB subsidiary Start Germany, which replaced previous operator Hessische Landesbahn in December 2021.

To bridge the gap between the introduction of the first hydrogen trains in December and the completion of deliveries, Alstom will be organising replacement vehicles and interim forms of operation according to contractual arrangements drawn up with RMV.

“The 27 hydrogen trains make the Taunus a pioneering region in Germany and beyond," says Mr Ulrich Krebs, deputy chairman of the RMV supervisory board and district administrator of the Hochtaunuskreis district.

“For passengers, this means more seats and free Wi-Fi,” says RMV managing director, Professor Knut Ringat. “In addition, the hydrogen trains are locally emission-free. With hydrogen as a low-emission technology, we are investing in the future with climate-neutral public transport. Our ambitious goal is to do without diesel vehicles from 2030, with the right financing framework and availability."

“The combination of the war in Ukraine affecting the supply of vehicle parts and the still tense Covid-19 situation pose an unprecedented challenge for the entire railway industry,” says Mr Müslüm Yakisan, president of Alstom in Germany, Austria and Switzerland. “This delayed the delivery of the trains by a few weeks. Nevertheless, we are very pleased that the first vehicles for the RMV are now starting test operations on the future operational routes in the Rhine-Main area.

Elsewhere in Lower Saxony, operation with hydrogen trains commenced on the regional line from Cuxhaven to Buxtehude via Bremervörde, west of Hamburg, on July 25.