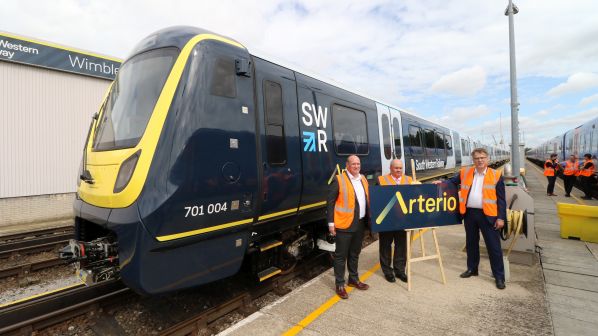 The £1bn contract for 750 new vehicles, which will be branded Arterio by SWR, is being financed by rolling stock leasing company Rock Rail.

The SWR Aventra fleet will be delivered as:

Production of the trains at Bombardier Transportation’s Derby factory was delayed for around three weeks in March and April due to the coronavirus lockdown. Driver training is underway with the first five 10-car trains, while the first five-car train is being tested at the Melton Mowbray test centre.

SWR intends to introduce the trains later year on the London Waterloo - Staines - Reading route where class 458 units dating from 1998-2002 will be replaced. All of the new Arterio fleet will be based at Wimbledon depot although minor servicing and stabling will occur elsewhere, especially at a new depot being built at Feltham.

Fleet introduction will take two years and the new trains will replace all 1980s-built class 455/456 EMUs plus the much more modern class 707 Siemens Desiro City trains which will be transferred to Southeastern from 2021-22 onwards. Only the Siemens Desiro class 450/444 EMUs will remain in service plus the older class 442 EMUs which are being rebuilt with new traction equipment.

The Aventra trains, which only have standard-class seating, are equipped with accessible toilets unlike many of the older trains they will replace which have no toilets. The toilet system supplied by Protec will use new biodigester technology which separates liquid and solid waste. The system uses microbes to convert the liquid to water, which can be discharged to the track, and to reduce solid waste volume and weight. This enables the train to be emptied once every 45 days, which is much less frequently than for existing rolling stock.

SWR is beginning to see an increase in passenger numbers following the coronavirus lockdown when it was only carrying 4500 passengers daily. SWR is currently transporting an average of 20,000 passengers per day compared with a daily average of 120,000 prior to the lockdown.