IRJ at InnoTrans 2022: Andrew Barr reveals that Thales acquisition should conclude in 2023. 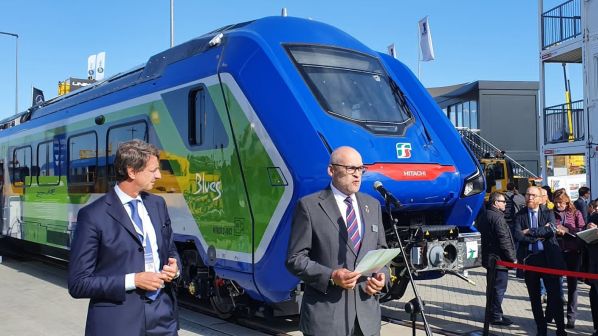 HITACHI Rail CEO, Mr Andrew Barr, is calling on the British government to make decisions on future rolling stock orders to offer reassurance to the manufacturer’s Newton Aycliffe plant in the northeast of England.

With no new orders in the pipeline, Barr told IRJ that Hitachi is paying a lot of attention to the British market. “We need the government to start making some decisions because we have got good opportunities there and business cases that need to be approved,” Barr says. “We think it makes sense to do that, but we are a business and we can’t keep an empty plant there. We have quite a challenge on our hands.”

Hitachi was also awarded a £1.97bn contract in a 50:50 joint venture with Alstom to supply 54 eight-car trains for HS2 in December 2021. Barr confirmed that this is a “British train” and discussions are underway with Alstom on how manufacturing of these sets will be conducted in Britain.

Further fleet orders, however, are not forthcoming. The continuing process of reform to the passenger operation model and the introduction of Great British Railways (GBR) as a single guiding mind are commonly cited by the industry as creating uncertainty in the market.

Barr says testing of the West Coast and East Midlands trains is underway, reflecting the late stage of the development of these orders. “We’re into the full-scale manufacture of those trains,” Barr says. “Next year is the focus year for some of those [government] decisions to be taken.”

Barr added that Newton Aycliffe is available to support European orders although it is complicated by Brexit. He says Hitachi has invested in welding and painting facilities at the plant while optimising skills using experience from its plants in Pistoia and Reggio Calabria to standardise working processes. “It’s an asset,” Barr says.

In contrast to Britain, loading at Hitachi’s Italian plants, which it inherited following the acquisition of Ansaldo Breda in 2015, is strong according to Barr. He added that he believes that Hitachi’s tri-mode Massacio multiple unit, exhibited at InnoTrans and branded Blues by Trenitalia, which has ordered up to 135 sets under a €1.2bn contract, has potential for use across Europe.

Likewise, Barr is looking for further development of the ETR 1000 high-speed train, which is manufactured in Pistoia, after Hitachi finalised the acquisition of activities related to Bombardier Transportation’s contribution to the train from Alstom earlier this year. Trenitalia operates ETR 1000s in Italy and cross-border services to France, while Spain's Ilsa has ordered 23 trains, the first of which will commence operation with Iryo in Spain later this year.

Barr also revealed that he is hopeful that Hitachi will finalise the deal to acquire Thales' Ground Transportation Systems business in early 2023, stating that the process of “carving out” the rail business from the wider company is coming to an end. Hitachi announced the £1.66bn deal in August 2021.

“It is a real game changer for us,” Barr says. “It puts us in a leadership position in the signalling market and it puts us way up there among the leaders for the overall market as well.”

Rather than technology, Barr says the acquisition increases Hitachi’s global presence in the signalling and train control space, including in Germany, Canada, Singapore and Mexico.

“It is very much my plan to integrate the two businesses together,” Barr says.

The full interview with Andy Barr will appear in the October edition of IRJ.