€179m order will help replace diesel prior to further electrification. 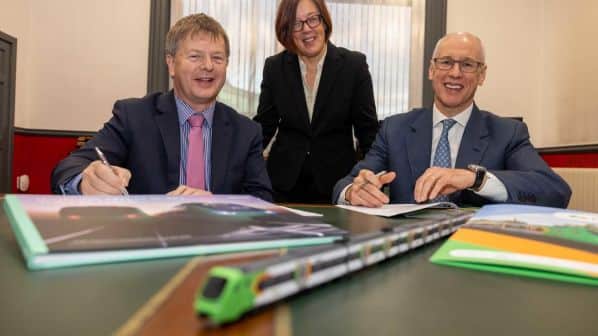 IRELAND’S Minister for Transport, Mr Eamon Ryan, has secured agreement from the cabinet for Irish Rail (IÉ) to order 90 battery-electric cars from Alstom before the end of this year.

The aim is for the trains to be delivered in 2026 to help reduce emissions on the Dublin commuter network beyond the electrified Dublin Area Rapid Transit (Dart) lines.

Alstom says that the order for 18 five-car BEMUs will be added to the initial order for 19 five-car X’trapolis trains - 13 of which are to be BEMUs and six EMUs - placed in 2021. It added that the BEMUs will be capable of using overhead electric power when under the wires and then making journeys of more than 80km under battery power, facilitating the replacement of the diesel trains currently operating longer-distance commuter services.

The purchase of the additional trains is being funded by the Department of Transport through the National Transport Authority (NTA) at a total cost of around €179m. The X’trapolis trains will form the first battery-operated train fleet in Ireland and the batteries will be topped up using fast charging stations at selected termini, as well as by recovering energy from regenerative braking while the BEMUs are on the move.

Without needing to wait for further electrification, the new trains will also facilitate the Dart + Programme, which aims by 2025 to expand the current network to Drogheda in the north, Maynooth/M3 Parkway in the west and Cellbridge/Hazelhatch in the southwest. The Dart + programme aims to increase the number of people living within 1km of a station served by frequent, high-capacity trains to and from Dublin from the current 250,000 to 600,000.

Subject to suitable infrastructure being installed, the new trains may also operate on the coastal line south of Dublin from Greystones (current limit of Dart services) to Wicklow, or on the lines radiating out from Cork to Mallow, Cobh and Midleton.

Each 82m-long train will have space for 550 passengers with walk-through gangways, low-level floors and automatic retractable steps to maximise accessibility for all passengers. Other features will include train areas for cyclists and families and charging facilities for mobile phones, e-bikes and scooters, as well as onboard CCTV. An Alstom maintenance programme will continue to provide technical support and spare parts for the new fleet for a period of 15 years.

"The funding for 90 additional battery-electric carriages for Dart+ is hugely welcome, as it will enable us to bring capacity and emission benefits to current and future commuters in advance of electrification,” says IÉ CEO of IÉ, Mr Jim Meade. “Additionally, the benefits will be felt nationwide, as existing Intercity and Commuter carriages operating in the Greater Dublin Area are freed up for use around the national network for more frequent services and more capacity on a range of routes.”

"I have no doubt that the Dart+ as a programme of projects will prove to be transformative for the entire region, and work is already proceeding well on progressing the infrastructure schemes,” says NTA CEO, Ms Anne Graham. "The procurement of these battery-electric carriages is indicative of the urgency that is being shown when it comes to providing sustainable accessible transport alternatives for communities along these lines and beyond.

"In the draft Greater Dublin Area Transport Strategy 2022-2042, we announced that Public Service Obligation bus and commuter rail fleet in the Dublin Metropolitan Area will be 100% electric and zero-emission by 2035. Today’s announcement marks a significant step towards that objective.”