Part of fleet equipped with batteries for non-electrified routes. 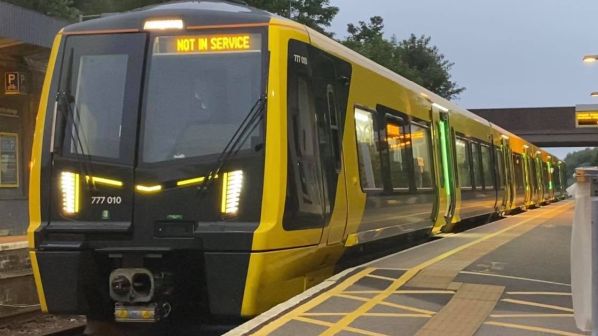 MERSEYRAIL has introduced the first of its £500m fleet of class 777 four-car EMUs built by Stadler and ordered by the Liverpool City Region Combined Authority to replace trains dating from 1978-80.

While the class 777s will take current at 750V dc from the third rail electrification system on the Liverpool commuter network, they will be equipped for future operation under 25kV 50Hz ac catenary and seven have batteries to operate on non-electrified lines. Both features will help extend the Merseyrail’s commuter network to serve a wider catchment area.

Following operating trials carried out in July 2021, it was found that the trains equipped with five-tonne batteries will be able to travel up to 32km without recharging.

The order for the 52-strong fleet of new EMUs was originally placed in 2016, and subsequently increased to 53 trains, but their introduction was delayed by Brexit, the effects of the Covid-19 pandemic, a flood at the Stadler factory, and Merseyrail staffing disputes over proposed driver-only operation. These were eventually resolved by an agreement that a guard will be retained onboard.

The first of the trains to enter service was launched on the Liverpool Central - Kirby route on January 23. A phased rollout will next see the trains introduced on the route to Ormskirk and on Merseyrail’s Northern and Wirral lines later this year.

Features of the new trains, designed in consultation with the public according to Merseyrail, include wide aisles, sliding steps which bridge the gap between the train and the platform edge to allowing level boarding, and lighting around the doors which turns green when it is safe to board or red when the doors are about to close.

“This is a massive day, not just for our area, but for the entire country, as we launch the UK's first publicly-owned trains in a generation into service for the first time,” Rotherham said. "We’re charting our own course, putting the public back into public transport and delivering the services that our region’s 1.6 million people deserve."