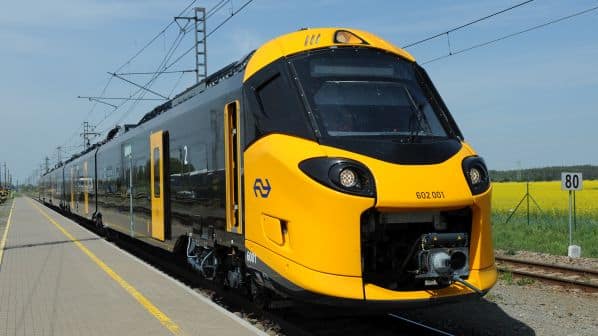 NETHERLANDS Railways (NS) has again postponed introduction of its new Intercity New Generation (ICNG) fleet, ordered from Alstom to operate on HSL South, the high-speed line from Amsterdam to the Belgian border.

The ICNG, Alstom’s Coradia Stream design, was due to be gradually introduced into passenger service from the forthcoming timetable change on December 11.

However, NS has decided to postpone the start of commercial operations and has informed Ms Vivian Heijnen, state secretary at the Dutch Ministry of Infrastructure and responsible for railways, that this may now take place during the second quarter of 2023, warning that there is still the risk of further delays.

NS has told Heijnen that the quality and reliability of the ICNG are not yet at an acceptable level, despite a software update in June. Some teething problems have been resolved, but new issues have also emerged.

In its letter to the state secretary, NS also reports that there have been delays to the production and delivery of the new ICNG fleet, partially due to the Covid-19 pandemic and the war in Ukraine. NS says that the quality of the welding performed during train construction is insufficient and does not meet its standards.

A revised timetable for introducing the new fleet will now be drawn up. Risks to meeting this schedule include software updates and completing the process to obtain the Authorisation to Place on the Market (Apom), required by European Union (EU) legislation before the ICNG can enter service.

A shortage of production capacity at Alstom and further delays to train deliveries may also affect the revised schedule for entry into service.

However, NS reports that since April it has received enough ICNG trains to enable test operation to begin. Driver training began on October 3, following the completion of training for all conductors and train managers. Training is also now in progress for rolling stock maintenance staff.

NS expects to complete introduction on Breda - Rotterdam - Amsterdam services before the end of 2023. Commercial operations with the ICNGB variant for the Amsterdam - Brussels route would follow with the timetable change in December 2024.

NS also ordered 20 ICNGBs equipped for 1.5kV dc, 3kV dc and 25kV 50Hz ac, two of which serve as prototypes for the as yet unordered three-voltage ICNGD for operation into Germany, equipped to take current at 15kV 16.7Hz ac in place of the 3kV dc of the Belgian network.