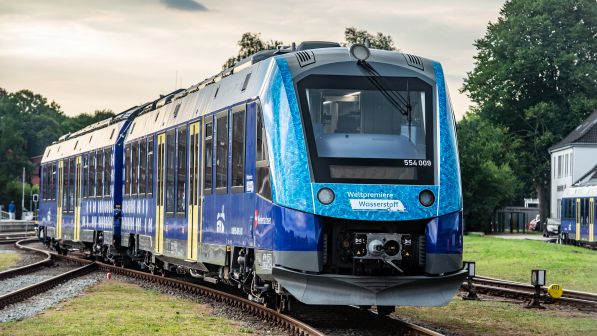 THE official launch of hydrogen-powered regional passenger services on the route from Cuxhaven to Bremerhaven and Buxtehude in Germany took place on August 24.

A fleet of 14 two-car Coradia iLint trains is now providing what manufacturer Alstom describes as the world’s first 100% hydrogen-operated service, over the 100km from Cuxhaven to Buxtehude.

The hydrogen fleet is operated by Elbe-Weser Transport Company (EVB), which began trials in September 2018 with two pre-series trains.

Preliminary passenger services with series production trains began on July 25 this year, with the DMUs that previously operated on the line held in reserve until the required level of reliability was reached.

Lower Saxony Transport Authority (LNVG) signed a contract worth €85m with Alstom to supply the hydrogen fleet in November 2017. The deal includes maintenance over 30 years.

The trains have a maximum speed of 140km/h and a range of 1000km, enabling them to run for an entire day on one tank of hydrogen.

Refuelling takes place at a hydrogen filling station built at Linde. In operation, the trains emit only steam and condensed water and make little noise.

Alstom points out that a significant part of Europe’s rail network will remain non-electrified in the long term, despite ongoing electrification projects in many countries.

The number of diesel trains in operation is still high, with over 4000 cars in use in Germany alone.

French National Railways (SNCF) has ordered 12 Coradia Polyvalent dual-mode trains (electric/hydrogen) for the regions of Auvergne-Rhône-Alpes, Bourgogne-Franche Comté, Grand Est and Occitanie. CAF is supplying the trains after acquiring the Coradia Polyvalent platform from Alstom. The French supplier will continue to supply the hydrogen traction system.

“Emission-free mobility is one of the most important goals for ensuring a sustainable future and Alstom has a clear ambition to become the world leader in alternative propulsion systems for rail,” says Alstom chairman and CEO, Mr Henri Poupart-Lafarge.