PKP Intercity has received the final EU160 Griffin locomotive from an initial batch of 20 ordered from Newag under a Zlotys 367.6m ($US 92.5m) contract placed in June 2018. 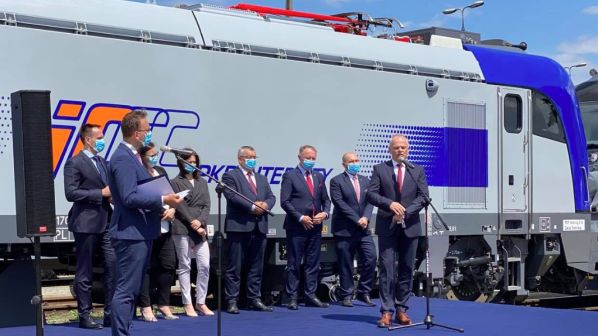 PKP Intercity deployed the new 160km/h locomotives on various services from July 1. These include on trains from Warsaw to Kiev, Chełm, Zbąszynek, Poznań, Szczecin, Kołobrzeg, and Piła; from Lublin to Zbąszynek, Piła and Kołobrzeg; Kołobrzeg - Bydgoszcz (seasonal); Chełm - Bydgoszcz; and Poznań - Lublin and Białystok (seasonal).

The four-axle Griffin locomotive is equipped with ETCS level 2 baseline 3.4.0, and can haul up to 800-tonne passenger trains and up to 3200-tonne freight trains. The locomotives are also fitted with a remote diagnostics system allowing technicians to monitor their condition in real-time.

PKP Intercity received an initial batch of eight locomotives in February after authorisation to place into service was secured from Polish railway authority UTK.

The new locomotives are a strong reinforcement of our fleet," says Mr Marek Chraniuk, president of the Management Board of PKP Intercity. "They will improve our offer on many routes important for passengers, which will contribute to a further increase in the popularity of our services."

PKP Intercity exercised the first option in the framework contract for an additional 10 locomotives in September 2019, taking the total value of the contract to Zlotys 551.4m, part of which is funded by the European Union.

Delivery of the new locomotives is part of the operator’s Zlotys 7bn fleet investment programme under which 80% of the operator’s rolling stock will be new or modernised, and at least 77% will offer passenger WiFi by 2023.