Siemens hydrogen train to start testing in Bavaria in 2023

BRB ‘curious and open’ to alternative forms of propulsion. 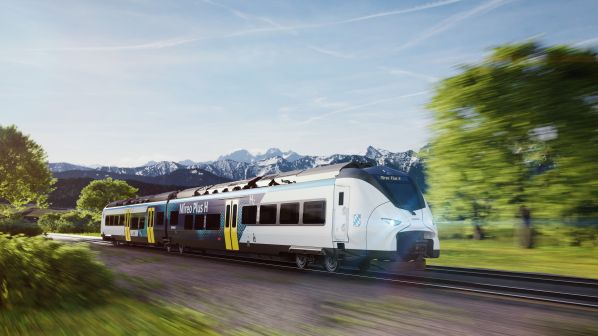 A Siemens hydrogen train will be tested on the Augsburg - Füssen route in Bavaria from mid-2023.

The two-car train will be used on the Bavarian Regional Rail (BRB) network with initial testing planned to take 30 months.

The train, which will be based in Augsburg, will be unveiled to the public in spring 2022, with testing beginning in Bavaria the following year. Passengers will be able to use it from January 2024.

The train is being developed from the Mireo Plus H platform and is designed to operate on non-electrified lines. It will have a range of 800km.

The main components of the hydrogen traction drive are two fuel cells mounted on the roof. The system uses batteries from Saft that are installed beneath the floor.

“The train is another important component in Bavaria’s hydrogen strategy,” Aiwanger says. “My ministry is promoting research, development and applications in the field of hydrogen technology. We’re organising this rail project together with our partners because we’re convinced that hydrogen technology will make a significant contribution to decarbonising transport. We’ll prove in Bavaria that business and climate protection can be reconciled with green hydrogen.”

“We agreed to test hydrogen technology and to test the Siemens Mobility train in passenger service because we are curious and open to alternative forms of propulsion in the railway sector as well,” says Mr Arnulf Schuchmann, BRB technical managing director.