The contract was awarded to Stadler following a successful appeal against EAV’s previous selection. 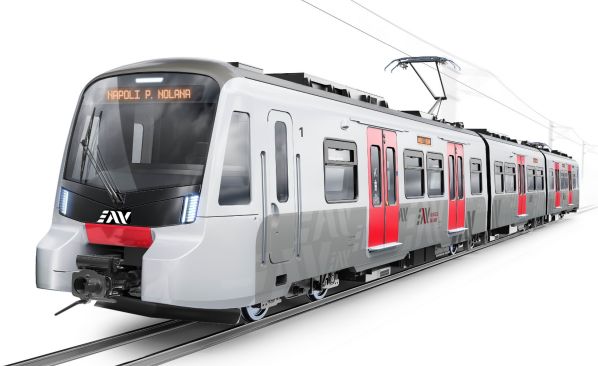 Artist's impression of the new EMU for EAV.

VOLTURNO Autonomous Body (EAV), the transport authority for the Campania region of Italy, has awarded a framework agreement for the supply of up to 40 three-car EMUs to Stadler.

The awarding of the contract follows a ruling by the Council of State on March 8 which selected Stadler to supply the new trains, following a legal challenge by Stadler to overturn EAV’s previous decision to award the contract to Hitachi in September 2019.

The contract includes an initial order for 23 1.5kV dc EMUs and covers the production and delivery of the 40m-long trains, as well as the provision of maintenance for five years following commissioning.

The trains will be used to operate services on the 950mm-gauge 142km Circumvesuviana regional network, which consists of six lines serving eastern Naples suburbs and running to Sorento.

The trains will have aluminium car bodies to reduce energy consumption and overall weight and will have wide gangways and five doors on each side for improved accessibility and faster alighting and boarding at stations.

The new fleet will be progressively phased in to replace older vehicles currently used on the network. EAV’s current fleet includes 21 three-car ETR 211 Metrostar EMUs reintroduced in 2018 following a wave of severe technical failures in that model which left EAV with severe rolling stock shortages.