Singing star and Swiss ski legend name trains operating on both on metre and standard-gauge track. 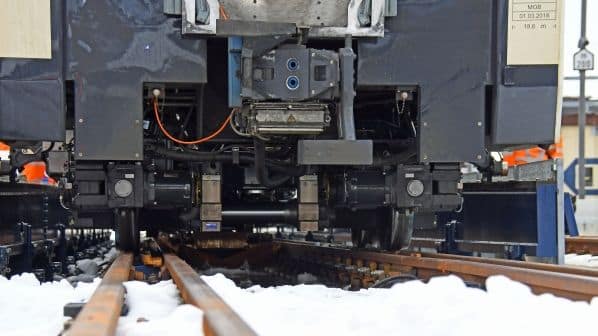 A view of the gauge changing trackwork at Zweisimmen.
Photo Credit: MOB

TWO new Swiss gauge-changing trains will enter service this weekend using both metre-gauge and standard-gauge tracks between Interlaken, in the Bernese Oberland, and Montreux, on Lake Geneva.

The new GoldenPass Express (GPX) trains have been designed and built by Stadler to undertake the through Montreux - Gstaad - Zweisimmen - Interlaken journey in 3h 15min. In March 2018, the Montreux Oberland Bernois Railway (MOB) awarded Stadler a contract to supply 20 variable-gauge coaches for GPX services.

The gauge-changing technology was designed by MOB and then manufactured by Alstom.

The system not only changes the wheelset gauge but also raises and lowers the car bodies’ height and steps below the doors to accommodate the differing heights of the narrow and standard-gauge platforms, which vary by as much as 180mm. Prose was also involved in the design work for the gauge-changing system and carried out feasibility analysis, mechanical and control engineering development and strength analysis.

The first commercial GPX departure will leave at 09.08 on December 11 from Interlaken West station. At 09.35, 115km away, another train will make the reverse journey from Montreux, according to MOB.

The GPX will run only one trip in each direction until June 10 2023 because tourism demand has not yet fully recovered from the Covid-19 pandemic and the war in Ukraine, MOB said. From June 11 2023 the company will ramp up the service to four daily return trips.

The Golden Pass route is operated by both the 1000mm-gauge MOB and the 1435mm-gauge Bern–Lötschberg–Simplon Railway (BLS), with the MOB up till now using both modern panoramic trains and a classic “Belle Epoque” train recreating the appearance of the narrow-gauge Pullman cars operated by the Compagnie Internationale des Wagons-Lits (CIWL) on the route for a short time in the late 1920s. Introduction of the new trains and the start of through services will end the need for passengers to change at Zweisimmen.

A special ceremony was held at Gstaad on December 9 to launch and name the two new trains, the first by Canadian pop star, Ms Shania Twain, who is a resident of Tour-de-Peliz, on the shore of Lake Geneva, and the second by Mr Michael von Grünigen, a Swiss former alpine skier who is a native of the Bernese Oberland.

A detailed description of the gauge-changing technology used on the new trains will appear in the February 2023 edition of IRJ.