DESPITE significant disruption to logistics caused by the coronavirus outbreak in China, the third of four 750kW diesel-battery hybrid locomotives built by CRRC Zhuzhou Locomotive for German Rail (DB) arrived in Germany in early March. 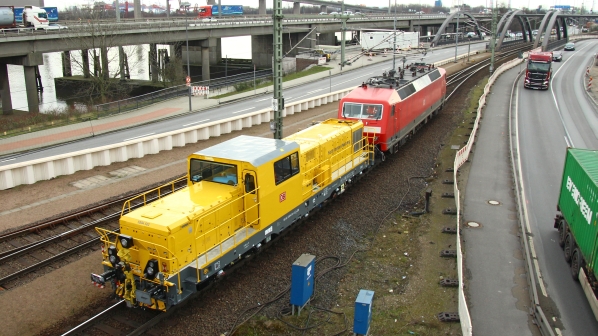 The unit arrived by ship at Hamburg docks and was then moved by rail to the DB site at Minden on March 3.

Unlike the previous two locomotives, which are for use with works trains for S-Bahn Hamburg at Hamburg Ohlsdorf depot, DB Networks will use the new locomotive across the national network.

The new four-axle unit has separate diesel and battery modules and is over 2m longer than the two initial prototypes at 16.7m. The new locomotive is registered as a DB unit unlike the first two which are owned by Vienna based CRRC European subsidiary CRRC ZELC Verkehrstechnik.

DB ordered four of the diesel-battery hybrid locomotives from CRRC Zhuzhou in 2018 with options for up to 16 more. CRRC displayed one of the two prototypes at InnoTrans in 2018.

The production locomotives will incorporate lithium-titanate batteries capable of producing 150kW of traction power or 400kW when combined with the 250kW diesel engine.