TURKISH Wagon Industry (Tüvasaş) has completed the first EMU to be designed and manufactured in Turkey, with the train due to enter service by the end of the year. 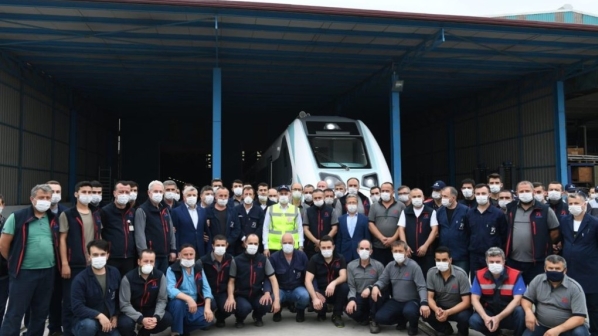 The train, developed under a joint venture of Tüvasaş, Turkish State Railways (TCDD) and Turkey’s Ministry of Transport, Maritime and Communications (UDH), was unveiled on June 15 during a visit to the Adapazarı-based manufacturer by the minister of transport and infrastructure, Mr Adil Karaismailoğlu.

The five-car EMU has capacity to seat 324 passengers, including two seats for passengers with reduced mobility, along with air-conditioning, a fire alarm system, audio and visual passenger information and CCTV. The train also features a safety system with an automatic brake.

Testing is due to begin in August, and TCDD has already ordered 20 sets.

Tüvasaş plans to build 111 cars initially, with between three and six cars per train. The manufacturer inaugurated a new facility for the production of aluminium bodyshells for the fleet in June 2019.