THE Transportation Safety Board of Canada (TSB) has launched an investigation after cracks were found on four wheels on three separate Alstom Citadis Spirit LRVs used on the Ottawa Light Rail Transit (OLRT) Confederation Line, which opened in September last year. 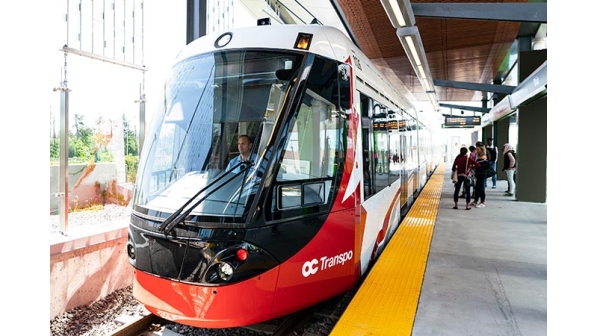 Cracks were found in both wheels of an LRV wheelset on July 2 during maintenance and inspection. The two wheels were secured to the axle by bolts. Two additional wheels with similar cracks were identified on two separate LRVs on July 3, with the affected LRVs taken out of service for bogie replacement. Following the detection of the cracks, half of the OLRT vehicle fleet was taken out of service.

Rideau Transit Group (RTG), a public-private general partnership between ACS Infrastructure Canada, EllisDon, and SNC-Lavalin, was awarded a contract to oversee the design, construction, financing and maintenance for Phase 1 of the OLRT. The three companies also form Rideau Transit Maintenance (RTM), which was awarded a 30-year contract to maintain the Confederation Line.

Alstom and RTG/RTM announced a modified timetable would be introduced from July 5 after the defects were identified, with an internal investigation also launched to determine the cause of the defect.

Until the cause is identified and addressed, Alstom and RTM will inspect each wheel on every LRV each time the vehicle is used in service.

As ridership is down due to the Covid-19 pandemic, RTG will provide fewer trains than usual to allow the safety inspections to be undertaken alongside the regular maintenance regime. Services are now running at eight-minute frequencies, with this likely to remain in place until Alstom and RTG/RTM have identified the cause of the wheel defect and resolved the issue.

The TSB has launched a Class 3 investigation, which can take more than a year to complete, and will analyse a small number of safety issues, possibly resulting in recommendations being made.

The TSB investigation is led by Mr Rob Johnston, who has been with the board since 2001 and is responsible for all activities related to rail investigations in TSB’s Central Region, which extends from Cornwall, Ontario, to near the Alberta - Saskatchewan border.