The train will be capable of carrying up to 12 tonnes of parcels. A trial will commence in June. 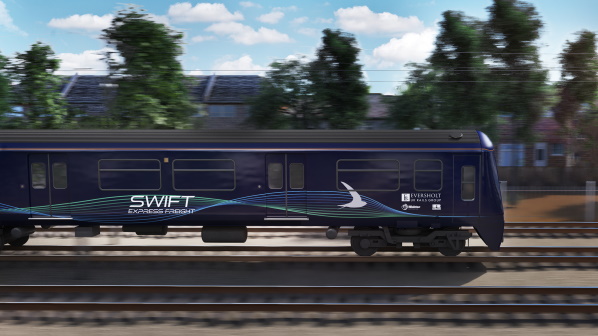 BRITISH rolling stock leasing company Eversholt Rail has announced that it is developing a 100km/h express freight train in partnership with engineering services company Ricardo, which will begin trial operation in June.

The ‘Swift Express Freight’ project plans will create a demonstrator train by converting one of Eversholt’s class 321 EMUs - unit 321334 - to create a light freight and logistics train capable of carrying up to 12 tonnes of parcels on the British rail network.

Work on the design of train interiors and approvals was conducted by Ricardo, with the firm subsequently sub-contracting Wabtec to carry out overhaul. Conversion work will begin in April at Wabtec’s Doncaster site, and will include the removal of passenger features, installation of new flooring and storage for containers, and a new livery.

Eversholt says the train will be used from June to operate a trial service on an unspecified route. The company confirmed that it is currently in discussions with a number of potential operators. It also confirmed that further trains could be converted, subject to the number of orders.

“We are excited to be developing the Swift Express Freight train which will help to support customers with a cost-effective solution to help them meet the growing demand for home delivery of parcels around the UK,” says Mr Paul Sutherland, client relations director at Eversholt Rail.

“This demonstrator will show the potential for a modal shift of parcel freight to rail for rapid delivery to urban centres around the UK, removing trucks from our streets, reducing carbon emissions and improving air quality,” says Mr Jonathan Brown, technical and innovation engagement lead for rail at Ricardo.

A similar concept is being developed by fellow British firm Rail Operations UK (ROUK), which is due to launch its first rail freight logistics service under its Orion High Speed Logistics brand in April.