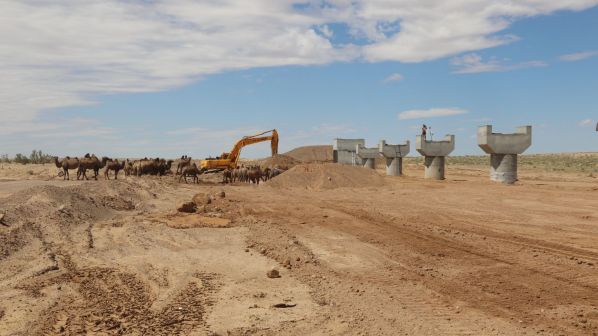 The new railway will connect with the UBTZ’s central line and will transport coking coal from Tavan-Tolgoi in southern Mongolia, one of the world's largest untapped coal deposits. The line could also serve major iron, zinc and other mineral deposits along the route at Tsagaan Suvarga, Kharmagtai, and Manlai. When completed the railway will have capacity to transport for up to 15 million tonnes per year.

The project is estimated to cost Tughrik 750bn ($US 263m) and the line is expected to carry its first train in December.

Work is being carried out by UBTZ and the Mongolian armed forces with 87 subcontractors working on the project, which commenced on May 24 2019. Russian Railways (RZD) International is also providing technical consulting services for the project under a one-year agreement signed in December.

According to a post on Mongolian Railways website on July 17, preliminary construction of foundations for the new line are 91.4% complete, with pipeline work 79.2% complete and bridges 44.2% complete.

The Mongolian government reportedly scrapped a planned IPO for the Tavan-Tolgoi mine due to coronavirus pandemic in April. Bloomberg reported on the planned IPO on the Hong Kong Stock Exchange in October 2019, which was was estimated to have the potential raise around $US 1bn. The funds would have supported the development of the mining project and connecting railways.