TURKEY’s minister of transport and infrastructure, Mr Adil Karaismailoğlu, has inaugurated the start of domestic freight services through the Marmaray tunnel under the Bosporus in Istanbul. 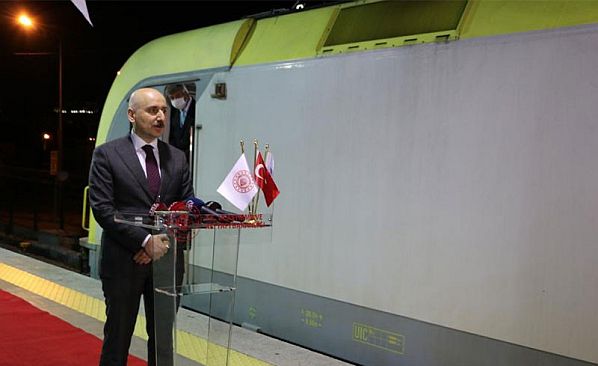 Turkey’s minister of transport and infrastructure, Mr Adil Karaismailoğlu, speaking at the inauguration of domestic freight services through the Marmaray tunnel on May 8.

Karaismailoğlu and Mr Ali İhsan Uygun, general manager of Turkish State Railways (TCDD), boarded the first domestic freight train at Söğütlüçeşme station on the Asian side of Istanbul at 22.40 on May 8 and travelled in the locomotive cab as far as Kazlıçeşme station on the European side where the train arrived at 23.04.

The 1200-tonne train with 16 flat wagons was loaded with 32 containers containing plastic raw materials destined for Çorlu. Up to now, rail freight has been transported by ferry from Derince on the Anatolian side to Tekirdağ on the European side.

“We are witnessing a historic moment this evening,” Karaismailoğlu said.  “As of this evening, we are starting to pass our domestic freight trains through Marmaray. After that, freight will pass from Marmaray to Europe without interruption.” The first freight train from Beijing to Europe via Turkey travelled through the Marmaray tunnel in November.

Karaismailoğlu also gave a quick update on the expansion of the high-speed rail network in Tukey. “High-speed train investments continue,” he said. “We are trying to put the Ankara - Sivas high-speed line into service this year. Work continues on the Ankara - Izmir line. Our railway investments in all parts of our country such as Bursa, Yenişehir, Osmaneli, Adana and Mersin are progressing rapidly.”