FOR many years, passenger rail in Australia has been the poor cousin when it comes to service and infrastructure upgrades, a situation not helped by the federal government’s generally negative attitude to public transport. 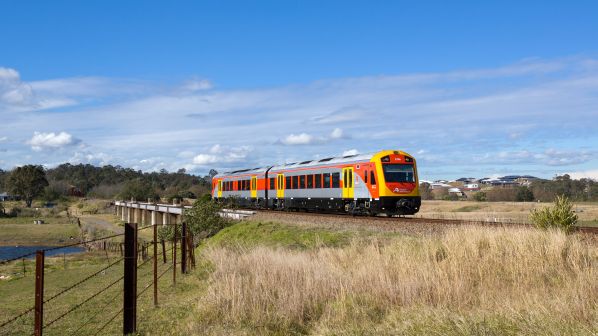 Recently, however, partially through the perseverance of Australia's state governments, but also through a remarkable reversal of policy at the federal level, passenger rail is back on the agenda. Several major projects are well advanced and some key rolling stock orders are in the pipeline.

In a first for Australia, Sydney’s fully-automated $A 8bn ($US 5.76bn) North West Metro link between Rouse Hill and Chatswood will commence operation by the middle of 2019. Tunnel boring machines (TBMs) are in the ground as construction progresses on stage 2 of the metro project, the $A 12bn Sydney Metro City & Southwest extension.

TBMs are also active in Melbourne, excavating the twin 9km tunnels for the Metro Tunnel project, which is aiming to create additional capacity on the suburban network.

A number of level crossings at major intersections in Melbourne were replaced with viaducts in 2018. Dubbed ‘skyrail’, the work is part of the state government’s major upgrade of the Cranbourne and Pakenham commuter lines and a broader programme to remove up to 50 level crossings in the metropolitan area.

In Western Australia, two TBMs are excavating 8km tunnels that will form part of the $A 1.2bn rail link to Perth Airport. While the project was due to open in 2020 this was pushed back to 2021 in December after a leak damaged a 26m section of one of the tunnels, causing a sink hole to form.

Two other projects in the state have recently been reviewed by Infrastructure Australia: the 14.5km Yanchep rail extension, which is ranked as a “high priority,” and the 17km Thornlie-Cockburn rail proposal deemed a “priority.”

The long-delayed electrification of the 40km Adelaide - Gawler suburban line in South Australia received $A 615m in government funding commitments in 2018, with the federal government providing $A 395m and the state $A 220m. Work is now planned to start during 2019.

Commuters across New South Wales are also set to benefit from new train deliveries on several fronts during the year, beginning with 22 driverless trains built in India by Alstom for the new metro services, the last of which will arrive in early 2019.

Not far behind is the first delivery from Hyundai Rotem of double-deck inter-city EMUs under a $A 2.8bn order. The sets will initially enter service on the Central Coast and Newcastle line in late 2019.

An announcement is expected early in the year of the successful bidder for the replacement of the XPT fleet, and other trains that provide regional long-distance services in New South Wales. The three shortlisted consortia are led by Downer, Bombardier and CAF. Transport for NSW aims to award a contract in 2019, with the first trains expected to enter service in the early 2020s.

In Victoria, the first of the High Capacity Metro Trains broke cover in early December prior to commencement of testing. Downer/CRRC is assembling 65 seven-car EMUs locally, which will provide additional network capacity in conjunction with the Pakenham and Metro Tunnel infrastructure projects.

2019 will also be significant for light rail in Australia with new systems in Canberra and Newcastle set to commence operation early in the new year. However, Sydney’s extension of the existing network through the city and to the southeast has not fared so well, with ongoing contractual and logistics delays pushing completion back to May 2020. A final business case for the Stage 3A extension of the highly-successful Gold Coast Light Rail in Queensland is expected shortly with the federal government already committing $A 112m to the project.

With a renewed focus on congestion issues and public transport, in particular heavy rail, state governments are suddenly getting more ambitious in their search for solutions. In Victoria plans have been floated for a $A 50bn orbital heavy rail urban line linking the existing radial network of commuter lines, while the government and private sector have offers on the table to fund the proposed $A 15bn direct link to Melbourne’s main airport.

The New South Wales government also says that it is time to revisit higher speed rail options of at least 200km/h. A $A 4m study was announced in December to look at yet uncosted options to upgrade existing links from Sydney to several regional centres within a 300km radius. Momentum, it seems, is building for the Australian passenger train.