This summer an alliance of French rail freight operators presented an ambitious plan to double rail freight volumes over the next 10 years. David Haydock examines the plan and asks whether it can succeed. 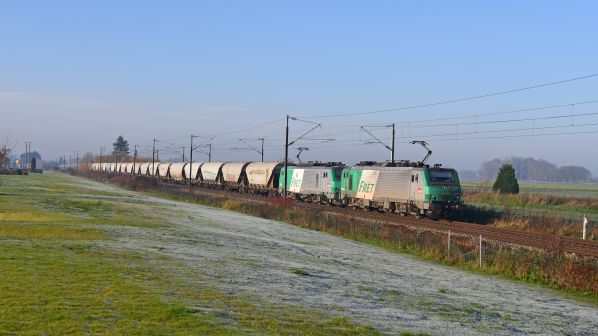 Fret SNCF, which has a 55% market share in France, has lost money for the past 15 years but is slated to break even by 2023. Photo: David Haydock

Of the €15.7bn plan, the majority of actions focus on modernisation, enlargement and construction of infrastructure at a cost of €13.3bn. The second main measure, which will cost just over €2bn, will provide temporary support for intermodal and wagonload traffic. Further measures propose investment in new technology, “greening” traction and updating the wagon fleet.

The plan has been produced at a promising time for French rail freight. Although the Covid crisis has hurt traffic, the public and government have at last noticed the essential role played by the sector. Concerns over road transport’s contribution to pollution and global warming also favour a relaunch for rail freight. Indeed, the 4F report sets out the massive externalities caused by road transport and points out savings available by expanding rail freight’s market share.

The government’s Relaunching France package announced on September 3 included a promise of €4.7bn for railways, €4.1bn of which will go to infrastructure manager SNCF Network. Some of the remainder will support measures outlined in the 4F plan.

“Improved service should bring about a doubling of wagonload traffic and block trains, but intermodal traffic is expected to triple or even quadruple.”

Doubling of freight traffic will put pressure on the rail network and it is therefore not surprising that 85% of the total budget for the 4F plan is slated for infrastructure improvements.

SNCF’s head of rail freight, Mr Frédéric Delorme, says the key to doubling rail freight is improving infrastructure - decongesting busy junctions and increasing the loading gauge and train lengths. However, he says it is equally important to consider the external costs of road transport, and to move to much greener logistics.

Priority 6 of the plan includes Action 18, which would gobble up €10.5bn between 2025 and 2030. This work includes adding tracks and introducing bi-directional signalling where trains need to overtake, new chords at Saint Fons (Lyon), Conflans-Jarny (near Metz) and Le Boulou (near the Spanish border), the elimination of some level crossings, and provision of diversionary routes around Lyon, Lille and Paris. To avoid additional expenses and planning delays, this work will focus on improving existing lines where possible. Tuffereau hopes to see electrification of the Amiens - Laon - Reims - Chalons route to create part of an outer ring line avoiding Paris from the port of Le Havre.

Priority 7 concerns upgrading existing freight terminals and port networks by 2024 at a cost of €100m, and calls for a further €500m to improve access to ports and a network of freight terminals up to 2030. Delorme estimates that France will need eight to 10 new large terminals by 2030.
Under Priority 8 €600m is earmarked to increase the loading gauge to P400 standards, which will support the transport of semitrailers on all strategic routes. A further €400m is required to support an increase in train lengths initially to 850m and later to 1500-1700m.

For Tuffereau, Action 24 of this section, which calls for short-term improvement to customer service, is essential. SNCF Network will receive €210m up to 2024 to revise its maintenance practises, effectively ending line closures of more than six hours a day and banning blockades of double-track lines unless there is a reasonable diversionary route.

The 2018 Spinetta report on the state of the rail network questioned the need for 9000km of branch lines out of a network totalling 28,000km. A year later, the Philizot report recommended giving powers to the regions or other bodies for many of these lines. Tuffereau welcomes the new regime. “While minor lines form just 20% of the network, they generate 50% of all French rail freight,” he says.

Priority 3 aims to improve rail’s competitive advantage by favouring rail over road, increasing intermodal traffic and subsidising existing and future traffic where necessary. A variety of measures costing government about €120m a year - including an extension of the existing intermodal subsidy - are intended to encourage modal shift. 4F is also soliciting support for wagonload traffic to the tune of €75m a year.

Both subsidies would be temporary and would cost the government €2bn over the 10-year period. This total is modest compared with the subsidy offered for TER regional passenger services - the Hauts-de-France region for example pays SNCF a €500m annual subsidy. There are signs that the French state is beginning to move in this direction. Fret SNCF confirmed that the government will provide an exceptional payment of €170m in mid-December, which includes €70m to support wagonload traffic, a halving of traffic access charges in 2021 at a cost of €65m, an intermodal load subsidy expected to cost €20m, and €15m for the development of three new Autoroute Ferroviares piggyback services: Barcelona - Perpignan - Rungis - Antwerp; Cherbourg - Bayonne; and Calais - Sète.

A total spend of €670m on new technology from central government and the EU is proposed in Priority 5. The majority of this would go on developing driverless trains, automatic coupling and a computerised tool to evaluate the environmental impact of transport in real-time. Other proposed developments include the use of rail-road vehicles for local wagon distribution and collection, low cost electrification and automation for terminals.

Priority 4 proposes allocating €490m to modernise operations. €320m would support retrofitting of locomotives, including with ERTMS, renewal of the wagon fleet to reduce noise, increase modularity and improve coupling strength, and optical identification for wagons and containers. Proposals for locomotives include elimination of diesel traction within 10-15 years.

One of the most eye-catching measures - and by no means the most expensive at €30m - is Priority 1, Action 1, which calls for the creation of a digital platform to monitor trains operating in France allowing customers to track wagons.

The platform will also identify spare capacity on trains enabling companies to purchase space on each other’s trains, saving resources and reducing the number of paths needed. It is hoped that this can be introduced by 2024. “This should save operators a considerable amount of money, especially for ‘last mile’ pick up and set down of wagons,” Tuffereau says. Several operators currently run their own wagonload services in addition to Fret SNCF’s national network.

Although traditional traffic is set to grow, operators agree that the greatest growth will come from intermodal. “Improved service should bring about a doubling of wagonload traffic and block trains, but intermodal traffic is expected to triple or even quadruple,” Tuffereau says.

Mr Paul Hodgson, director of international activity at CFL Cargo, Luxembourg, sees little growth in wagonload and block trains, but great potential for intermodal, comparing the 120-150 trains a week flooding out of the British port of Felixstowe with the 12 trains a week which currently operate out of Le Havre, France’s busiest container port.

Mr Louis-Félix Touron, Euro Cargo Rail’s head of business development, agrees that intermodal has massive potential. “France is a long way behind other European countries, particularly Germany, but with government aid, wagonload traffic can not only be stabilised but also has potential for volumes to grow,” Touron says. Delorme would even like to see road tolls introduced for transiting lorry traffic and restrictions on traffic where there is an alternative container or piggyback rail service.

It remains to be seen how the rail unions will respond to the new plan. The past 10 years of stagnant traffic is partly attributable to the massive nationwide strikes. Indeed, the idea that Fret SNCF might cooperate with private operators on last mile services, rather than use its own resources, might not go down well; job losses, especially in non-core personnel, are almost certain over the next couple of years to make the company more efficient.

However, Tuffereau believes that this time things might be different. “The unions realise that Fret SNCF is in danger of disappearing completely and are ready to behave responsibly,” he says. If growth does happen at the 5-10% annual rate envisaged, jobs will be created and Fret SNCF, as well as its competitors, will be able to prosper, reversing the culture of decline that has dogged the sector for decades.

Fret SNCF: Responsible for around half of TFMM’s turnover and with a 55% market share in France, Fret SNCF operates the national wagonload network, a range of block trains and provides traction for intermodal services under contract to Novatrans, VIIA and others. Fret SNCF has lost money for the past 15 years but is slated to break even by 2023. Delorme says the company expects to benefit from wagonload traffic growth thanks to recently joining the Xrail partnership which covers most of Europe. Fret SNCF will also seek productivity gains by running longer and heavier trains.

The company has built up debts of €5bn which the government is unwilling (and unable under EU rules) to write off. French media reported recently that SNCF is now starting to sell assets in order to reduce the debts and hopes to obtain €2.5 billion for wagon lessor Ermewa.

VFLI, created as a “low cost” freight subsidiary, and operating a wide range of traffic, will be renamed Captrain France in January 2021. The move will improve integration with the other Captrain subsidiaries, with the aim of offering customers end-to-end service across borders.

Ecorail Transport was created in 2010 to operate trains carrying aggregates from western France and became a subsidiary of VFLI in 2019. In early 2020 Ecorail started to provide drivers for VFLI in western France, and cooperation is expected to increase in future.

Captrain was created in 2009 after SNCF acquired Veolia Cargo’s activities and the German private operator ITL. It has since set up subsidiaries in Benelux, Italy, Spain and Poland.

Naviland Cargo is SNCF’s intermodal operator specialising in container services from France’s ports. The subsidiary has been given a brief to expand into other ports on the North Sea coast where Captrain owns subsidiary Railtraxx.

VIIA operates Autoroute Ferroviaire piggyback services. The company has suffered poor growth due to successive strikes and also a lack of quality paths. Delorme says traffic growth is dependent on freight being considered as important as passenger traffic and the allocation of quality paths.