European Loc Pool was established in Switzerland in 2018 by a group of highly-experienced rail specialists who saw a need for innovation in the locomotive leasing market. IRJ correspondent Quintus Vosman talks to CEO, Willem Goosen about the company’s ambitions. 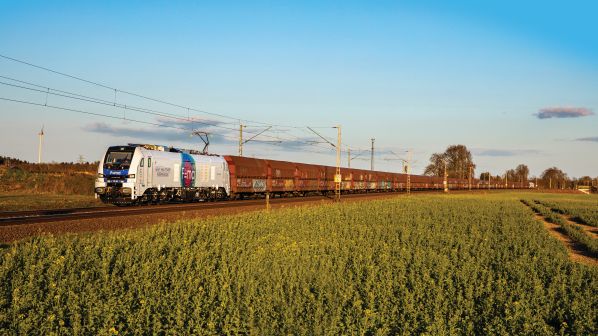 EUROPEAN Loc Pool (ELP) is the newest kid on the block in the European rolling stock leasing market as it only started trading in 2019. The company was founded by Mr Peter Spuhler in his position as CEO of PCS Holding, Mr Haydn Abbott, and Mr Willem Goosen.

“All three of us have extensive experience in the rail industry, including manufacturing, selling, financing and leasing,” Goosen explains. “We also have ‘fresh’ ambitions to get things done in the rail sector in Europe. Being the same generation, we hope to stay in the business for another 10 years, hopefully even longer. During this time, we want to innovate in the market as a ‘disruptor’ in a positive sense.”

Goosen says he and his two partners believe that too little has been done to innovate in the European rail industry. “For 40 years there has been insufficient innovation and improvement of the basic products in rail transport. I am mainly talking about rolling stock, especially in the freight sector, and the way Roscos provide services to train operators.

“We have also included other forms of rail transport in our strategy and business plan. It is quite conceivable that in the near future ELP will get into and finance freight wagons and passenger rolling stock. All our activities are based on full-service leases. The first steps have already been taken, but for the time being the focus is only on freight locomotives.”

ELP got off to a quick start, placing its first order for 50 locomotives with Stadler Rail in August 2018. The order includes 40 Euro Dual Co-Co locomotives with a 500kN tractive effort, which can run on lines electrified at 15kV 16.7Hz and 25kV 50Hz and are rated at 6.15MW in electric mode. The locomotives also have a powerful diesel IIIB engine for operation on non-electrified lines. The remaining 10 locomotives comprise Stadler’s Euro 9000 Co-Co hybrid, which also have a 500kN tractive effort and an output of 1.9MW in diesel mode and up to 9MW in electric mode. All of the 40 Euro Duals will be operational by the end of 2021, with delivery of the Euro 9000 locomotives starting at the end of 2022/beginning of 2023. ELP has signed a frame agreement for another 50 locomotives for which Goosen says ELP has arranged financing. Goosen describes this as phase 1 with “more on the horizon.”

“Our locomotives are more expensive than a single four-axle unit, but cheaper to operate because there is no need for a second locomotive.”

“We believe that a large proportion of the current Bo-Bo multi-system locomotives do not meet the market requirements for long-distance heavy-haul because they are not powerful enough,” he says. “Operating long, heavy trains across Europe often requires two locomotives, which is inefficient, but has been normal practice in Europe for a very long time. We know that such transport is possible with just one locomotive and we have many customers operating our locomotives to prove it. We are creating single locomotive operation as a new standard and so, potentially, all double traction Bo-Bo locomotives will be redundant.

“There are at least two manufacturers with a Last Mile diesel engine with a power rating of approximately 250-300kW. Many of our customers tell us that these locomotives are expensive and do not meet their expectations and want to change their locomotives.

“Freight trains will become heavier and longer in the future with 740m-long trains as standard. But a Last Mile engine can find it difficult to accelerate a 2000-tonne train on even a small incline and haul it at a reasonable speed.”

The Euro 9000 has an output of 6.5MW on dc electrified lines and can obtain an additional 1.9MW boost from the diesel engine. “We are also working on increasing the power rating of the diesel engines up to 2MW by software amendments, which will make the Euro 9000 as powerful as a Vectron Dual Mode when operating on diesel power,” Goosen says.

“A Euro 9000 can haul a 2000-tonne train from the Swiss-German border to intermodal terminals in Northern Italy at the same average speed as two Bo-Bos in multiple traction. That is the unique selling point (USP) of ELP.”

Nevertheless, ELP regards having diesel engines in its locomotives as a stop-gap until more sustainable traction, such as hydrogen or battery power, is available as a viable alternative, not just on the locomotive but also refuelling or recharging infrastructure.

Goosen says the economics of operating one Co-Co locomotive like the EuroDual or Euro9000 instead of two Bo-Bo units are compelling with only six axles instead of eight and one set of onboard ETCS equipment. Two Bo-Bo electric locomotives cost 20-30% more than a single Co-Co but cost twice as much to operate, with the additional benefit of less wear and tear on the track.

“Our locomotives are specifically designed to cause even less wear and tear than a single Bo-Bo locomotive, partly through an innovative bogie design,” Goosen says. “We have managed to overcome the fears of network managers about six-axle-locomotive track wear, especially over points.”

ELP wants to start two other activities where it believes it can be innovative, acting again as a disruptor, by offering complete freight trains with innovative locomotives and wagons, and passenger trains for international operation.

ELP hopes to start the complete freight train business at the end of 2021 by offering full-service leases for block trains including traction. As with the Co-Co locomotives, Goosen says the equipment must be “innovative and bring convenience and increased efficiency for our customers and users.” He says the length of the trains must be optimised, for example with short couplings. “We also want to introduce automatic couplers and distributed power supply from the locomotive through the entire train,” Goosen explains. The idea is for the locomotive to provide power to the wagons for such things as temperature control, with the ability to transmit data between the wagons and the locomotive. “We want features that make it easy for the customer while increasing productivity and efficiency,” Goosen says.

ELP also wants to have wagons which can carry many types of freight. Goosen says some rail freight operators such as Innofreight, TransANT and SBB Cargo are already innovating. “We are also working on innovations and we want to make a clear difference in the market,” Goosen says.

“We are already in touch with all kinds of potential customers, both large and small. They all share a passion for innovation and understand the need for change, particularly in the context of the green agenda. Contact with major end customers is also essential, such as Ikea in Sweden, the automotive industry and, last but not least, retail. Knowing our own customers and their customers enables us to identify opportunities for innovation in a targeted manner.”

“Our locomotives are specifically designed for use on the entire European rail network.”

ELP also wants to innovate the lease product. “Eventually we want to offer a different way of leasing: capacity leasing,” Goosen reveals. “That means paying only when you really use it. The ultimate goal is for the assets not to be included on the customer’s balance sheet - it has been mandatory to have operational leases on the balance sheet since the banking crisis, but this is disadvantageous and difficult. We also offer an innovative insurance package, which is included in the rate as standard. With us, the customer gets an all-in-one invoice once a month and that’s it.”

Goosen says he is happy with what has been achieved so far. “With strong shareholders we have achieved all our financing targets, including equally strong support from financial institutions. With this, we can move forward confidently with a professional manufacturer delivering products that have met all the specifications and requirements, especially in reliability and availability. We have gone from zero to 50 delivered or ordered locomotives in less than two years which demonstrates the scale of our achievement, despite the Covid-19 pandemic.

“We have a support center in Braunschweig for the handover of locomotives to customers and maintenance. We are building a network of maintenance workshops and technical support points in Europe together with Stadler Rail Services, our service provider. We have strict agreements for parts deliveries so that the availability of our locomotives is as high as possible.

“Our locomotives are specifically designed for use on the entire European rail network.

“The Fourth Railway Package is a challenge for innovation. The role of the rail industry has been successfully limited to approval for placing rolling stock on the market. Authorisation for placing in service of new rolling stock and the route compatibility for each train is the full responsibility of each individual railway undertaking (RU). In principle, this is a chance to create a USP in the rail freight segment, but this innovation can also be copied by the next RU.

“These processes are bound by very different rules on the network statements. These details are defined by the state-owned infrastructure managers, who see other RUs as competitors to their own RU. Hardly any of the current small, highly innovative RUs are able to manage this process because the effort and arbitrariness are too great. Right now, we see too much freedom on the infrastructure side. It is not only necessary to unify signalling, but an overall strategy is also needed to harmonise the railway system for every detail, such as bridge loads, train detection systems, train load calculation or operating rules.  ELP supports its customers in this process to achieve the full impact and benefits of the new, innovative rolling stock.”

Nevertheless, Goosen says ELP has a headstart in the market, with a level of risk that ELP can manage. “We believe that we can stay two to three years ahead of the rest of the market. We will certainly face competition, but for the moment we are taking advantage of our different risk approach and our ability to manage risks differently from other leasing companies. This stems from our experience, more than 70 working years altogether, that we have as the founding team. We have also formed a highly skilled team in ELP, together with a professional group of service providers in asset management, maintenance and many other areas.”

Haydn Abbott is chairman of ELP and is also a non-executive director of British Rosco Porterbook Leasing. He was a member of the supervisory board of Czech private passenger operator Leo Express from October 2012 to March 2020. Abbott was CEO of Angel Trains Group, another British Rosco, from June 1999 to August 2008, when he became CEO of the breakaway Rosco Alpha Trains/Angel Trains International, a position he held until September 2010.

Peter Spuhler joined Stadler Fahrzeuge in 1987. Two years later he took over the company and restructured it. In 1997, Spuhler bought Werk Altenrhein from Schindler Waggon and then expanded Stadler into Germany and Eastern Europe. Spuhler has been president of Stadler Rail Group since 2018 and became interim Group CEO of Stadler Rail in 2020 due to a difference of opinion regarding the strategic development of the company.