IRJ’s editorial team shines the spotlight on the next three winners of our inaugural Young Leaders in Rail Awards. 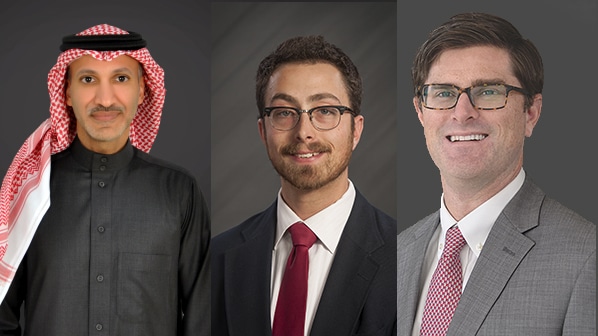 AFTER obtaining a BSc in civil engineering and technology from Rochester Institute of Technology, United States, Rafer Nichols started his railway career with New York City Transit’s Department of Subways, working on maintenance of way.

In September 2018, Nichols joined US Class 1 railway BNSF and he is currently responsible for projects which involve the local community from conception to the start of implementation. This involves negotiating, contracting and project management. Nichols is currently responsible for 50 projects in Arizona, 150 in Colorado and 60 in New Mexico. “The main challenge for me is to negotiate win-win deals between BNSF, the state and local authorities.

During his time with BNSF, Nichols was responsible for 10 bridge replacement projects as a structures supervisor as well as the safety and reliability of 425 bridges over four years. He was also the project engineer on the multibillion-dollar Eagle P3 passenger rail project in Denver involving the construction of 24km of adjacent corridor construction next to BNSF tracks. In addition, he was a project engineer on the Design Build Council Bluffs Interstate system project realigning 8km of two subdivisions for a new junction.

Nichols was a critical member on the recent City of Flagstaff Infra award of $US 35m for safety improvements and laying a new 1.6km third main track through the centre of Flagstaff, which includes building two new underpasses. “We will break ground next year on this five-to-seven-year project,” he says.

Nichols also mentors young BNSF management trainees. “I am currently mentoring a couple of young engineers,” he says. “It is fulfilling to see them learn and grow.”

Nichols’ nominator says he has had to overcome the stigma that the railways would not be willing to partner in city projects as well as the reluctance by communities to go for funding. “Through his strong work ethic and his drive to move great projects forward, he has been able to help lead these communities,” the nominee says. “Nichols drives for results and looks for ways to make things happen. He does not let an obstacle deter him from finding a path forward. I have yet to see him give up on a project even when the local community appears willing to throw in the towel.”

As for the future, Nichols says he loves the rail industry and intends to stay in it. “It is really exciting that we are getting on with a lot of projects that are well overdue,” Nichols says.

“It is an exciting time to be in the rail industry.”

Kitchin, who was Norfolk Southern’s (NS) group vice-president - domestic intermodal at the time of introducing the initiative in 2021, worked alongside the railway’s chief sustainability officer on the project. It included the launch of a Carbon Calculator, an online tool available on the NS website that allows current and potential customers to quantify and estimate their emissions reductions when shipping via NS rail network versus road transport. The Carbon Calculator was launched in March 2022, and it is already being used by thousands across the United States, Canada, Mexico, and the Caribbean.

He describes the project as reflecting broader changes within the energy market. “Five to six years ago this was not really a talking point but now it is becoming one, which is a unique challenge for us in how we help our customers to take advantage,” he says.

Kitchin joined NS in 2011. He is a self-confessed “financial nerd” starting his career in finance, working on mergers and acquisitions, but was attracted to join NS as a hometown company “working across all aspects of the economy.”

He has served in various roles during his time with the company. While working as group vice-president - agriculture, forest, and consumer products between 2019 and 2021 he led the initial creation of NS’ Thoroughbred Freight Transfer (TFT) concept. TFT is an expedited less-than-carload service and a door-to-door logistics solution which aims to help rail remain competitive with the trucking industry. The innovative service is running in the Chicago - Atlanta - Miami corridor and is serving as a broader effort to convert highway traffic to rail for efficiency.

In his latest role as vice-president for industrial products, Kitchin is focused on enhancing the original TFT concept. He says this is at the heart of NS’ “Flexible Freight” strategy, where a railway which can no longer depend on coal, is attempting to attract new customers by becoming more accommodating of their specific needs.

Kitchin is an example of someone who did not follow a family member when joining NS. He says in a competitive marketplace for talent, it is essential that NS appeals beyond its traditional railway family by ridding itself of the image of “a stodgy old industry” by talking about the innovative and exciting things it is doing.

Key to his plan is expanding a mentoring programme introduced while he was serving as director - agriculture marketing between 2018 and 2019 for new marketing team members to the entire organisation.

“Forcing people into pairs doesn’t work,” he says. “What we want to do is to create a culture of mentorship where more experienced folk feel like they can reach out to the less experienced and vice-versa. We are putting a lot of energy into that.”

Unsurprisingly given his financial background, Kitchin is also described as having a “a strong conceptual understanding of economic value” and excelling in financial leadership. He was recently challenged, along with the rest of NS’ management personnel and executive leadership team, to prepare and execute a new strategic vision for the company and was selected specifically by the executive leadership to participate in the early stages of the strategic planning process.

This was a role that his nominator says forced Kitchin to think differently than before; he was asked to break down assumptions and disconnects that slow NS’ ability to operate in an agile way.

The end product is a strategic plan and vision to make swift decisions for the good of NS’ business, its customers, the communities it operates within, and the overall freight industry. It has received praise from Mr Martin J Oberman, chair of the Surface Transportation Board (STB), who said he hopes the service “can set an example for others to be creative and aggressive in finding new ways to serve existing and potential rail customers.”

“What differentiates Kitchin from many other leaders is that he has a natural ability to motivate his team, drive their success, and help break down obstacles while developing and steering the company’s long-term strategy,” his nominator writes. “While Kitchin is extremely affable, he is equally competitive. He intrinsically understands how to work well with others while finding solutions that are fair and rely on data and factual circumstances to solve problems.”

Kitchin is also humble. When asked where he hopes to be in five years, he immediately responded by offering his hopes for the wider railway. “We have a tremendous opportunity over the next decade to move more customers and freight to the railroad,” he says. Whatever path NS does take, Kitchin, it seems, is poised to play a key role in the railway’s future.

AFTER graduating with a bachelor’s degree in mechanical engineering from King Fahd University of Petroleum and Minerals, Mr Khaled Alharbi joined Saudi Arabia Railways (SAR) in 2009 as construction was underway on the 3000km North-South Railway that connects the capital Riyadh to the border with Jordan at Al Hadithah , and east coast ports with the minerals mines in the northern province of the kingdom.

“Such a project is built maybe once in a century,” he says. “It was the right time for me to join in the early days of the project.”

Alharbi was initially responsible for the specification, commissioning and entry into service of the first fleet of heavy-haul freight locomotives specially built for service in the desert and phosphate wagons. Commissioning the fleet on the 1500km single-track railway through the inhospitable Saudi desert proved a challenge, as the dynamic performance of the vehicles could not be easily monitored remotely.

Alharbi overcame this by accompanying the early commissioning runs in a four-wheel drive vehicle, driving through rough desert terrain. During one trip, he broke down in the middle of the desert and spent the night in the cab of his vehicle before a shepherd found him the next morning. On another trip, he found a seriously ill track worker who had been bitten by a poisonous snake, and rushed him to the nearest medical facility.

Alharbi says working on the development of the Saudi network has given him a broad understanding of how a rail network is built and operated, and also allowed him to gain experience from experts from around the world.

Alharbi then moved on to become an operations business unit director, before becoming a senior vice-president for the passenger sector. During this time he has been involved in research and development to improve operation in one of the harshest environments in the world, with temperatures ranging from -5˚C at night in winter to 55˚C in summer, as well as coping with sand storms and other desert conditions.

Alharbi along with his colleagues has also been heavily involved in creating programmes to support and educate remote villages and communities, teaching them how to behave safely on and around the railway. This work was instrumental in SAR being awarded the British Safety Council’s International Safety Award in 2019.

Alharbi also served as board member of the Saudi Railway Polytechnic (SRP) between 2017 and 2021 and has helped to provide hundreds of young Saudi nationals with skills and training to successfully gain employment within Saudi Arabia’s growing railway industry.

“My goal is to see the railway grow and reach every location in the kingdom,” he says. “Nothing is impossible, I’m fully confident that in the very near future our railway will be distinguished as one of the top three in the world in terms of safety, reliability, quality, knowledge and engineering advancement, as well as reliability and customer satisfaction.”