Learning the lessons of Rastatt

Developed following the Rastatt incident in 2017, the ICM Handbook is designed to improve responses to disruptions along the Rail Freight Corridor network. Christiane Warnecke and Alessandro Fattorini from the Rhine-Alpine Rail Freight Corridor talk with David Burroughs about how guidelines from the handbook and other lessons learned from the Rastatt incident were put into practice following an accident at Auggen in April. 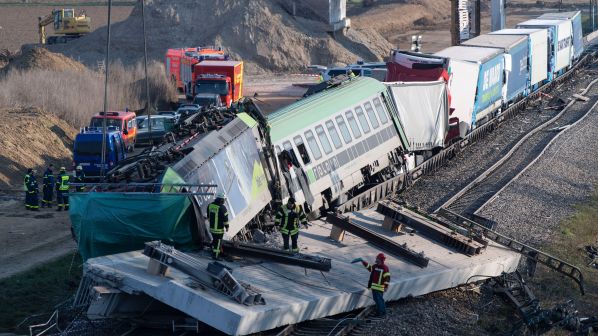 2BC59XD Auggen, Germany. 03rd Apr, 2020. A damaged locomotive stands crooked on the tracks after an accident. The locomotive had hit a concrete slab that had broken out of a bridge and fallen onto the tracks. The locomotive driver was killed in the accident. Credit: Patrick Seeger/dpa/Alamy Live News

THE Rastatt tunnel collapse in August 2017 caused one of the biggest disruptions to rail traffic in Europe’s recent history, halting services along the route for seven weeks before the line was repaired and reopened in October 2017. A study carried out by Hanseatic Transport Consultancy (HTC) on behalf of the European Rail Freight Association (Erfa), Network of European Railways (NEE), and the International Union for Road-Rail Combined Transport (UIRR), calculated that the total losses stemming directly from the incident reached €2.048bn.

Following the disaster, DB Networks, SBB Infrastructure and RFC Rhine-Alpine launched a series of workshops to develop a blueprint covering the future response to similar incidents and to identify options for strengthening the existing disaster management process.

This led to the development of the Handbook for International Contingency Management (ICM), which was accepted by the Rail Net Europe (RNE) general assembly in May 2018 and by the Platform of Rail Infrastructure Managers in Europe (Prime) in June 2018. It was also confirmed and supported by the transport ministries of Rail Freight Corridor (RFC) Rhine-Alpine and RFC North Sea-Mediterranean in May 2018. The ICM was first used by corridors RFC Mediterranean in France and RFC Scandinavian-Mediterranean in Denmark in 2019, with the handbook also used during an incident in northern Germany in August.

The first test of whether the RFC Rhine-Alpine and the related infrastructure managers (IMs) had learned the lessons of Rastatt came at 19.50 on April 2, when a BLS Cargo locomotive hauling an SBB Cargo International rolling-road service derailed after colliding with a 140-tonne concrete bridge section at Auggen on the Karlsruhe - Basle main line, about 20km north of Basle. The locomotive driver was killed, with several lorry drivers travelling on the train also injured.

The road bridge was scheduled to be demolished as part of the project to expand the line to four tracks, says Rhine-Alpine corridor manager, Mr Alessandro Fattorini, and an investigation is currently underway into how the concrete block came to be on the track.

Fattorini was notified of the accident by BLS around 21.30, and immediately contacted the German traffic control centre to clarify whether the ICM process would be triggered. Following the technical specifications and analysis conducted by German IM DB Networks, it was announced around 01.30 on April 3 that the incident was an international disruption under the ICM, triggering the ICM international contingency process on RFC Rhine-Alpine for the first time.

“This is triggered when the leading IM figures that it will take longer than three days to resolve an incident,” says corridor managing director, Ms Christiane Warnecke. “Another condition is that traffic is seriously affected. It could be that only one track is affected and most traffic could still run, and then the ICM process would not be initiated. In this case DB Networks found it would take longer than three days and traffic would be strongly affected, so they started the ICM processes.”

The first call between the incident managers from the affected IMs was organised for 10.00 on April 3, with a separate process launched for the communications managers.

“Before 10.00, we had several coordination calls with the leading infrastructure manager, which in this case was DB Networks, to better understand what had happened and to better organise the information flow during the calls with the incident managers and with the communications managers,” Fattorini says.

The initial calls were used by the leading IM, DB Networks, to inform attendees what had happened and to offer a forecast of how long the incident could last and what services could be affected. All participants coordinated on re-routing possibilities for freight trains, using the re-routing scenarios developed after Rastatt. These routes, reviewed in January 2020 and openly available on the corridor’s website, give an off-the-shelf view of which services could operate on which diversionary lines, depending on the weight, train length, and profile.

“In Switzerland the big issue was that a lot of the stabling capacity was taken by passenger trains.”

DB Networks was able to meet all requests for capacity on re-routing lines in Germany, where rail freight mostly used the route via Stuttgart/Singen. These re-routings were closely coordinated between DB Networks and SBB Infrastructure. Several freight trains were also redirected via France and the Brenner route.

The situation was eased by the coronavirus pandemic, which had caused many passenger services and some freight services to come to a halt, reducing pressure on capacity. However, there was a drawback, as it meant many trains were filling the limited stabling areas available to hold services waiting to pass the incident.

In order to facilitate this, the online “Park or Run” tool developed by Rail Net Europe in connection with the Train Information System (TIS) was used.

“In Switzerland the big issue was that a lot of the stabling capacity was taken by passenger trains, because due to the lockdown there was a very big restriction in Switzerland,” Fattorini says.

The Park or Run tool has been used by several IMs on RFC Rhine-Alpine since January 2018. In order to facilitate communication, the tool helps dispatchers to identify and agree on the handling of the trains directly affected by the interruption.

The tool also allows online communication with affected IMs about which trains may run as planned and which should be held and where, and helps to speed up border processes in daily business and minimise track occupation times in marshalling yards.

“We had some problems in the northern part of the corridor but everything was managed very well due to this tool,” Fattorini says. “We are reflecting on the lessons learned within the ICM processes and what is foreseen in the handbook. So we have to tackle these issues and come up with a proposal of how it will be better handled in the future.”

This was echoed by Mr Marcel Theis, COO and member of the executive board at SBB Cargo International, who said the process of managing and creating cross-border train paths needed to be improved during incidents.
SBB Infrastructure created a timetable showing which trains were allocated to different train paths in Switzerland, which could then be cross referenced with train paths in Germany.

However, Theis says there was a marked improvement in the IMs’ response between the Rastatt and Auggen incidents. While it took more than a day to get trains running following Rastatt, Theis says SBB was on a call with DB Networks at 23.00 on April 2, with the first train running again at 04.00 the next morning.

“This was one point where we said this was really a learning curve from Rastatt to now, there was good coordination between the IMs, they coordinated their telephone calls with all participants at the table,” he says.

“We see the necessity to have one coordinator at the coordinator level if there are bigger incidents that take longer but for Auggen, the coordination between the IMs was really good. From our point of view as an operator we were better prepared because we also had a learning curve and were able to react very quickly to this broken line and organise these new trains via Stuttgart.”

“All participants from IMs and RFCs were aware of their roles and the rules during the whole process.”

Warnecke agrees. “I think in terms of available information and in terms of the re-routing scenarios, and the very quick reaction, it was a very strong improvement,” she says.

While the Covid-19 pandemic eased pressure by reducing traffic, it also created additional challenges such as staff working from home. Two simulations were run following the implementation of the ICM Handbook in 2018, followed by an extended consultation to improve responses, but these were run from simulating the management of an incident from the RFC headquarters.

“All participants from IMs and RFCs were aware of their roles and the rules during the whole process,” Fattorini says. “The big challenge for me personally… was having to coordinate the process from the home office. During the simulations all persons from the RFC involved in the ICM coordination were in our crisis room so you can share information, you can ask your colleague to take over, you can ask ‘can you write down something.’ This was not possible in the home office situation - which was very challenging.”

The line was reopened at 20.00 on April 8, just under a week after the accident occurred. The ICM process was closed with a final teleconference to notify to all impacted IMs and RFCs when the line would reopen, along with any final details from the leading IM.

A review process of the ICM Handbook is currently ongoing at Rail Net Europe until the end of 2020, with all interested IM and RFC stakeholders involved in the process. This will look at how the handbook was implemented, what processes were and weren’t followed, and what might require adjustment for further improving the International Contingency Management processes at IMs and with the support of RFCs. The operators have also developed an ICM Handbook to coordinate processes between operators in an ICM case. The first version of the handbook is supported by a large number of European operators, and was presented at a meeting of the Railway Undertakings Dialogue forum and Prime in January 2020.

“Every accident is different but I think we can see that with very good international cooperation and with the good background from the simulations, we can strongly improve the response to big international incidents,” Fattorini says.