Mumbai Metro counts down to completion

Mumbai is one of the world's largest cities and India's commercial core, but it has trailed behind Delhi in terms of metro development. However, the finishing touches are now being added to the first line and work is progressing rapidly on two more, as Jagdish Kumar explains. 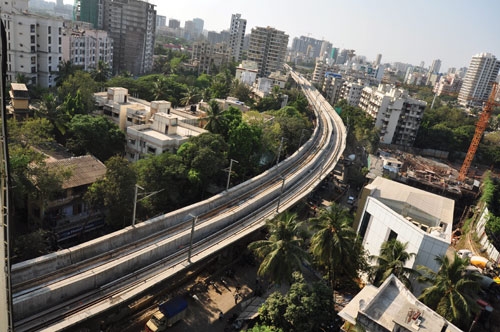 WITH more than 20 million people living within its metropolitan area, Mumbai is India's largest city and the fourth most populous in the world. The backbone of the rail network is the Mumbai Suburban Railway, which carries more than 7 million passengers per day, but with the need to carry ever greater numbers of people across the sprawling metropolis, Mumbai Metropolitan Region Development Authority (MMRDA) developed plans for a 146km eight-line metro network, 33km of which will be underground.

The Mumbai Metro is to be built in three phases, at a total cost of $US 6.84 billion. Construction began on the initial 63km phase in 2006 and if everything goes according to plan, residents will get their first taste of the metro by December.

MMRDA has prioritised construction of an east-west line, primarily because existing transport links between eastern and western suburbs compare poorly with north-south routes, which are catered for by the congested but frequent suburban railway services.

The first 12-station section of Metro Line 1 will run for 11.7km from Versova in the west to Andheri and Ghatkopar in the east. It is designed to carry more than 500,000 passengers per day and will reduce journey times between Versova and Ghatkopar from 90 minutes to just 21 minutes. Initially trains will run at 3.5-minute intervals, although headways will be reduced to two minutes as traffic grows.

The line will connect with the suburban network, interchanging with Western Railway at Andheri and Central Railway at Ghatkopar. Services are expected to operate between 05.30 and midnight, although this will be reviewed and the final timetable will be announced later this year. The metro's automatic fare collection system will use contactless smart cards for regular users and tokens for single journeys.

"More than 85% of the Metro 1 corridor has been completed and we expect the metro will be fully functional by the end of the year," confirms MMRDA CEO Mr Rahul Asthana.

Mr Dilip Kawathkar, joint project director for MMRDA adds: "We expect Mumbai Metro will start operations by December. The majority of the work is complete and while there are issues in some areas, these are being dealt with."

More than 3km of track has now been completed on the 11.7km line. Electrification has also commenced and at the time of writing more than 300 of the 750 masts required for Line 1 have been installed. MMRDA expects to begin dynamic testing soon on the first completed section of the line.

"We have faced many challenges in this project," says MMO. "The first was working within the four-to-five hour nightly time slots allotted by MMRDA. Then there was the challenge of underground mapping and utility diversion. In one case, it took us six months just to relocate a telephone cable. There were many other challenges such as managing the traffic flow - the stretch we are working on is the only east-west trunk road - together with mitigating noise pollution, and inconvenience to the public."

MMRDA is currently working to resolve access issues at Subhash Nagar station, where there are concerns over the impact of the metro on the Maheswari temple. Construction is underway on a cable-stay bridge over the Western Railway line at Andheri, and the Marol substation is nearing completion.

Construction of the 9.75 hectare DN Nagar depot is on schedule, with the main workshop and stabling lines largely completed. The depot will accommodate up to 21 metro trains, as well as an operation control centre, training facilities, a receiving traction substation, and an administrative block.

"Construction of the depot threw up many challenges," Kawathkar explains. "The land is low lying with huge deposits of marine clay, and major ground improvement works were required which spanned almost a year and a half. There are also sharp curves and interface constraints between the operational building and underground utilities."

Mumbai Metro ordered 16 four-car air-conditioned trains from CSR Nanjing in 2008. The first three trains have now been delivered and two more sets will arrive soon. In the longer term, the Line 1 trains will be lengthened to six cars.

Although Line 2 is now fully financed, construction is yet to begin on the initial 39.2km section between Charkop and Mankhurd as the PPP contractor Mumbai Metro Transport has not yet received environmental approval. This means a delay of four to five months is likely as the construction concession period for the project lasts until August, and will therefore need to be extended until December. Nonetheless, Kawathkar says the PPP structure means the delay will not have any financial impact.

Public consultation began in the last week of 2011 on the third and final line in the initial phase of the metro, which will link Colaba with Bandra on Line 2, with an extension to Santacruz Electronics Export Processing Zone (Seepz).

An environmental impact assessment is being carried out and a detailed Environment Management Plan (EMP) is being prepared in accordance with international standards.