The main route across the Pennines between Manchester and York is being upgraded and electrified to cut journey times and increase capacity for passengers and freight. Robert Preston spoke to Network Rail’s industry programme director, John Reed, about recent progress. 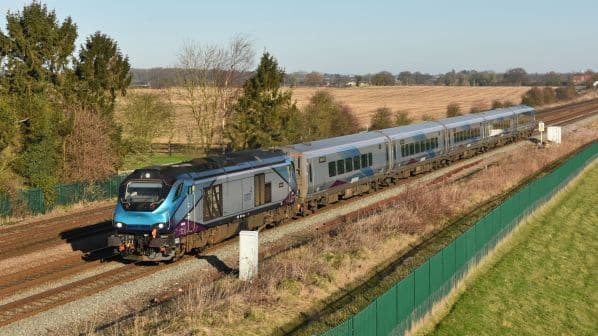 The Transpennine Route Upgrade (TRU) will see the enhancement and electrification of the 121.6km of railway connecting Manchester with York via Huddersfield and Leeds. Photo: Shutterstock/M Barratt

AFTER many years of discussion, planning and changes in policy that have seen the project grow from partial upgrades to a total route modernisation programme that may cost up to £11.5bn and take until 2041 to deliver, British infrastructure manager Network Rail (NR) is now set to get down to work on a major component of the Transpennine Route Upgrade (TRU).

This will see the enhancement and electrification of the 121.6km of railway connecting Manchester with York via Huddersfield and Leeds, serving a total of 25 stations. “Work has already started and we are getting on with this,” says Mr John Reed, NR’s TRU industry programme director.

Preliminary work, including the removal of footbridges in preparation for electrification, is now underway on the core section of the TRU programme, Project W3 that covers the 13km between Huddersfield and Westtown, just south of Dewsbury station in West Yorkshire.

On June 27, the secretary of state for transport approved a Transport and Works Act Order (TWAO) for the Huddersfield - Westtown section, granting NR legal powers to acquire the property needed to widen the railway from two to four tracks. Despite this being, according to NR, one of the largest TWAO applications it has ever made, the order was granted six months earlier than expected, the application having been submitted on March 31 2021 and examined by a public inquiry later that year.

“Reliability is key. Getting performance to a much higher level is very important for us.”

“This is the biggest single piece of work that we’re doing,” says Reed, who points out that work between Huddersfield and Westtown will affect 1600 individual parcels of land. “That’s a lot of back gardens,” he notes.

Widening the railway from two to four tracks will enable the segregation of fast and stopping passenger services, increasing line capacity, while a new flyover and underpass will be built near Ravensthorpe to avoid conflicting movements at the junction of the routes to Leeds and Wakefield. A new station will also be constructed at Ravensthorpe, while comprehensive refurbishments will take place at Huddersfield, Deighton and Mirfield stations, including accessibility improvements and enhanced passenger information systems.

Station and track work will take place during a nine-day blockade, closing the route at Dewsbury in February 2023, followed by a second nine-day blockade in June and weekend work at Huddersfield from July to October. The first crucial milestone for TRU, known as Key Output 1, is to complete the upgrade of three diversionary routes by May 2023 to enable trains to avoid these work sites.

“This will reduce the need for buses,” says Reed, who reports that feedback from passengers has indicated that they would prefer a longer rail journey over using replacement bus services during upgrade work. It is planned to operate an additional three trains an hour on diversionary routes via Todmorden, Wakefield and Castleford, with work to improve resilience now 90% complete.

Project W3 between Huddersfield and Westtown is due for completion “towards the end of this decade,” says Reed. Major works still await funding from the Department for Transport (DfT), with NR to make an application next year. In the meantime, NR is unable to provide a figure for the cost of Project W3.

Providing two additional tracks between Huddersfield and Westtown will enable more passenger services to be operated. “We add two extra paths every hour,” Reed says. “One fast path and one for local services.” TRU will enable six fast trains to operate every hour between Manchester and Leeds, which Reed describes as “a turn up and go service.” There will be two local trains every hour. The fastest journey time from Manchester to York is forecast to be reduced to between 63 and 66 minutes, and from Manchester to Leeds to between 41 and 42 minutes. Infrastructure upgraded under TRU should also be less prone to faults that cause delays to services.

“Reliability is key,” Reed says. “Getting performance to a much higher level is very important for us.”
The maintenance strategy for the upgraded route will make use of remote monitoring as well as on-train monitoring equipment, which Reed describes as “a very live piece of work.” NR is paying as much attention to how it will operate and maintain the Transpennine route as it is giving to the TRU enhancement projects themselves, he says.

Alongside the benefits of faster and more reliable passenger services, Reed says there is “really exciting potential for freight.” The DfT is funding infrastructure work to provide the W12 loading gauge between Manchester and Thornhill Junction near Ravensthorpe, and NR is currently developing proposals for DfT that will enable 15 electrically-hauled intermodal services to operate each day over the Transpennine route. The exact details have yet to be determined, but Reed says that one freight path per hour could be provided during the day outside the peaks, with other trains operating at night.

As well as complete electrification, the full upgrade of the Transpennine route includes resignalling with ETCS Level 2, removing the need for much lineside equipment. ETCS Level 2 will be installed from Stalybridge on the eastern outskirts of Manchester to Colton Junction south of York, where the route from Leeds joins the East Coast Main Line. This aspect of the TRU programme is still at the design stage, with no firm timetable established as yet for implementation.

Meanwhile, work is underway under TRU Project E234 to electrify the railway between Colton Junction and Leeds, where some track renewal work has also been undertaken. At the western end of the Transpennine route, Project W1 should enable electric services to begin operating between Manchester Victoria and Stalybridge by the end of 2024, delivering Key Output 2 of the TRU programme. Piling work for masts and other catenary work is underway, together with track renewals to increase the line speed, signalling upgrades and bridge work. A major nine-day blockade is planned at Stalybridge for March 2023.

As TRU makes moves from planning to implementation, the operators that use the route are convinced of the wider benefits that this long-term programme will bring.

Welcoming the granting of the TWAO order in June, Mr Chris Nutton, major projects director at TransPennine Express, said it was “a massive step forward towards delivering a railway fit for the 21st century across the north of England, which will provide real benefits for those that use our services and travel between some of our country’s biggest cities.”

According to Nutton, TRU “will not only improve connectivity for the communities that we serve, but also boost the economies of the towns and cities along the Transpennine route, providing greener, faster and more reliable services across the Pennines.” For Northern Trains, operator of local services on the route, regional director (east), Mr Tony Baxter, said that “this work is the key to unlocking the huge potential for our trains and stations to better serve our communities.”

“With faster, more frequent trains and more accessible, easier to use facilities at stations, our customers will benefit from supercharged connectivity between towns and cities across the Pennines, and beyond,” Baxter says.

ON July 20 Britain’s National Audit Office (NAO) published a report on TRU, having examined expenditure by DfT and NR on the project to see if value for money has been achieved, and also charting the changes in project scope that have increased costs and extended delivery times since 2011.

According to the report, DfT now expects to complete the revised TRU programme between 2036 and 2041, at a total cost of between £9bn and £11.5bn. These figures are primarily for infrastructure work but also include other elements such as rolling stock. The core elements of TRU, excluding projects to support the wider Northern Powerhouse Rail (NPR) programme, are forecast to cost between £6.2bn and £6.5bn for completion between 2030 and 2033.

DfT first set out plans for electrifying the Transpennine route in 2011, when the upgrade was forecast to cost £289m (at 2011 prices) and be completed by 2019. It continued to progress these plans until early 2015 when work was paused pending a review of NR’s investment programme. Work restarted in late 2015 with a revised scope that aimed to increase infrastructure and train capacity and reduce journey times.

The NAO says that the fundamental outcomes for TRU programme have remained unchanged since 2017, namely faster journey times, increasing infrastructure capacity and decarbonising the railway. Despite this, changing ministerial priorities and budgets have led the DfT to make repeated changes to the scope of the programme, adding full electrification and signalling upgrades. In 2018 the DfT expected TRU to be delivered within a budget of £2.9bn and completed between 2019 and 2024. The programme was subsequently revised several times with no clear agreement on the end state until 2021.

In November 2021 DfT committed to a revised scope for the TRU programme which is intended to facilitate the future NPR programme. NPR includes a new western line that will join the Stalybridge - Huddersfield route at Marsden, and additional work within the TRU programme to support NPR includes additional sections where three or four tracks are to be provided, work at Huddersfield station, a new passing loop for freight and digital signalling (ETCS) across the full Transpennine route.

The NAO says that “the certainty of this long-term vision presents an opportunity for cost-efficient supply chain engagement and resource procurement,” noting that the DfT’s repeated changes to the scope of TRU over the past decade “hampered progress and led to inefficient spend.” The government’s commitment to the long-term vision and scope of TRU as now set out reduces the risk of further scope change, according to NAO.

Nevertheless, in its conclusions the NAO says that TRU remains at risk of delays and cost increases, and it is not yet clear how its intended benefits will be achieved. This is despite the DfT announcing an increase in funding for the programme from £2.9bn to £9bn.

In particular, DfT has not yet committed to funding the rolling stock needed to achieve the full benefits of TRU, electric trains that are compatible with ETCS. “Until funding is confirmed there is no certainty that rolling stock will be at the required level,” NAO says.