Brazil’s president-elect is expected to maintain the country’s new line construction programme and continue the process to renew the regional rail freight concessions, the first of which are expected to be concluded soon. Renata Passos reports on the latest developments. 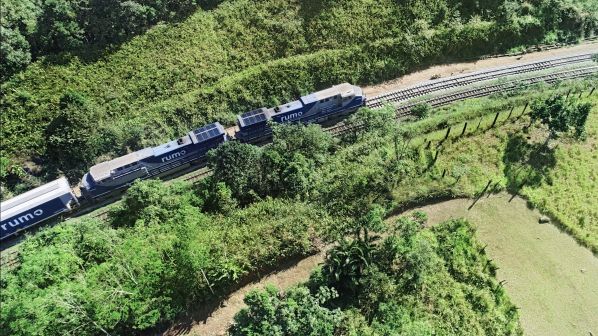 BRAZIL’s newly-elected president, Mr Jair Bolsonaro, will inherit the Investment Partnerships Programme (PPI), which provides for the construction of new railways in Brazil. However, in future the PPI team will report directly to the president rather than various ministries. At the same time, pronouncements by the president indicate that the current process of renewing freight concessions will continue despite the change of government. With these developments, rail freight is firmly on the agenda.

More new lines will be built in the next few years. Three are federal government projects under PPI comprising extension to the North-South Railway (FNS), Ferrogrão, and the West-East Integration Railway (Fiol).

Bidding will start before the end of the year for a new sub-concession for the south-central section of the North-South Railway. Total investment is estimated at Reais 3bn ($US 793m) over the 30-year duration of the sub-concession, including rolling stock, which is beyond the value of the bid price for the concession. According to Brazil’s National Land Transport Agency (ANTT), the auction should take place early in 2019.

This 1537km section links Porto Nacional, just south of Palmas in Tocantins state, with Estrela d’Oeste, in São Paulo state. The northern 855km stretch from Porto Nacional to Anápolis is already in operation, while the 682km southern part from Ouro Verde to Estrela d’Oeste is 95% complete. The railway is considered as one of the main projects to benefit agricultural production.

The Reais 12.7bn Ferrogrão project is still in the public consultation phase, and it is planned to publish bidding documents for the 65-year concession in the second quarter of 2019. The new line will be 1142km long and will create a new rail export corridor in northern Brazil, connecting Sinop in the grain-producing region of the midwest with the port of Miritituba, on the east bank of the Tapajós river. The railway is forecast to carry around 25 million tonnes of freight a year initially rising to 43.3 tonnes by 2050.

Also at the public hearing stage is the final section of the West-East Integration Railway (Fiol). The 1527km line will run from Ilhéus, on the coast of Bahia, to Figueirópolis on the North-South Railway. The route will mainly serve the grain producing area of western Bahia and aid the exploitation of iron-ore in the Caetité region. The 537km section from Ilhéus to Caetité is more than 70% complete and the 485km section from Caetité to Barreiras is around 20% complete, while the final 505km stretch is still at the study and project stage. The project includes a 2.9km bridge over the São Francisco river and is estimated to cost Reais 3bn.

In July, two other projects were added to the PPI: the Vitória-Rio Railway linking ports in the states of Rio de Janeiro and Espirito Santo, and the 477km northern section of the North-South Railway from Açailândia to Barcarena. The initial proposal is to implement the Vitória-Rio Railway project as part of the renewal of Central Atlantic Railway (FCA) concession.

The government intends to work with the private sector to develop projects considered of strategic importance, while in return, the companies will have other contracts, such as railway concessions, renewed for 30 years. Two projects will have priority. The first is the 383km section of the Central-West Integration Railway (Fico) from Água Boa to a junction with the North-South Railway at Campinorte. Budgeted at Reais 4bn, Fico will be built by mining company Vale, which in return will have the concessions for the Carajás and Vitória-Minas railways renewed until 2057. Even discounting what Vale spent to duplicate the Carajás railway, the company would have to pay a Reais 4bn fee to renew its concession. However, rather than paying the fee it could build Fico instead. This is one way to ensure that the money remains in the rail sector.

There is also a possibility that MRS Logístics will construct a 53km line parallel to a ring road from Perus in São Paulo city to Manoel Feio in Itaquaquecetuba in exchange for the renewal of its concession.

Under new legislation, a concessionaire can now invest in other railways or projects. And Mr Vicente Abate, president of the Brazilian Railway Industry Association (Abifer), believes lawmakers were right to propose cross-investment to keep money in the industry. “This kind of reinvestment has a multiplier effect,” he says.

Mr Fernando Paes, executive director of the National Association of Railway Carriers (ANTF), believes that the new government will continue with the rail freight concession renewal programme. “The fact is there is no short or medium-term alternative capable of dealing with the bottlenecks and structural problems facing Brazilian logistics that does not involve the early renewal of the concession contracts,” Paes says.

ANTF data shows that rail freight traffic is continuing to grow. Comparing the first three quarters of 2017 with the corresponding period this year, freight traffic increased by 19.57% from 350.7 million net tonnes to 419.4 million.

Five concessions totalling 12,675km and representing more than 90% of the freight carried on Brazil’s railways annually are up for renewal:

“The doubling of transport capacity on the Paulista Network is an essential condition for the flow of the growing volumes of freight, especially grain coming from Estrela d’Oeste,” Paes says. “The Carajás Railway has the same importance from the point of view of the shipment of freight through the port of Itaqui; in this case, the difference is that the duplication has already been made by the concessionaire. Carajás and the Paulista Network are examples of the positive, highly-welcome impact that these renovations will provoke for the ‘backbone’ of the rail freight system.”

According to Paes, the Paulista/ Rumo concession renewal process should serve as a template for future renewals. “From the Rumo process, we have developed know-how, templates and a standard methodology that will be applied to new processes,” Paes says. “It is only natural that the agency will be more agile in the processes that will follow.”

A new methodology has been adopted by concessionaires to deal with the issue of uneconomic lines in a technical and objective way. Various options being considered include closure, putting loss-making line to another use such as the transport of passengers or the operation of tourist trains, or turning them into American-style short lines designed to feed freight into the main railway corridors. “It is not reasonable to imagine that the extension of concession contracts will occur without these issues being addressed,” Paes says. “Certainly, renewals presuppose a solution to these problems.”

A study prepared by the Getulio Vargas Foundation (FGV) concluded that the early extension of the railway concessions, due to expire by the late 2020s, would be the best way for the government to stimulate investment in the sector, as well as renegotiate the terms of the current concession contracts.

FGV has calculated that additional investment in rail would produce benefits of around Reais 10bn, with 75% of the benefits derived from a reduction of transport costs, due to the migration of freight from road to rail, while a reduction in accidents, congestion and pollution would account for the remaining 25%. FGV says that each Reais 1m invested in rail would have a positive impact on the economy 3.1 times greater, in addition to the effect on employment, income and taxes.

ACCORDING to Mr Fernando Paes, executive director of the National Association of Railway Carriers (ANTF), renovations totalling around Reais 25bn are expected in the first five years of the new concessions, although Mr Vicente Abate, president of the Brazilian Railway Industry Association (Abifer) believes the total investment could be higher.

About one-third will be for rolling stock and track materials such as sleepers and fastenings. “Renewals will be a major boost to the industry, which has lost 3000 employees in the last two years,” Abate says.

According to ANTF, in 2017 the Brazilian rail freight fleet comprised 3268 locomotives and 109,160 wagons. The acquisition of 715 locomotives and 8580 wagons is forecast for the first few years of the new concession.

The rail industry is already prepared for the anticipated increase in demand. Greenbrier Maxion, with an installed capacity of 10,000 wagons a year, designs and produces all types of equipment at its highly-automated plant in Hortolândia, São Paulo.

Greenbrier Maxion has exported 50 GDN wagons to Peru for the transport of copper in September, as well as wagons to Gabon, Guinea, Venezuela, Congo, Colombia, Argentina and Saudi Arabia.

AmstedMaxion, located in Cruzeiro, São Paulo, has the capacity to produce 30,000 tonnes of castings and 85,000 wheels per year of which 20% are destined for export to the African and Latin American markets. The director general of AmstedMaxion, Mr José Santos de Araújo, is optimistic that the Brazilian railway industry will grow. “We went through the industry crisis, but we believe that Brazil will evolve,” he says.

Randon Implementos inaugurated a new Reais 100m road-trailer and freight wagon production facility at Araraquara, São Paulo, in March, and the factory began production of hopper wagons in November. The first batch of PET flat wagons, designed for the transport of steel materials and 20ft and 40ft containers was supplied to MRS. The factory has the capacity to produce up to 2000 semi-trailers and freight wagons per year.