Asian Development Bank is set to step-up support for transport infrastructure and improvement schemes under its Strategy 2030. Kevin Smith speaks with Rüdiger Zander, ADB senior railway specialist, about the challenges facing rail development across the continent and how ADB is helping to overcome these issues. 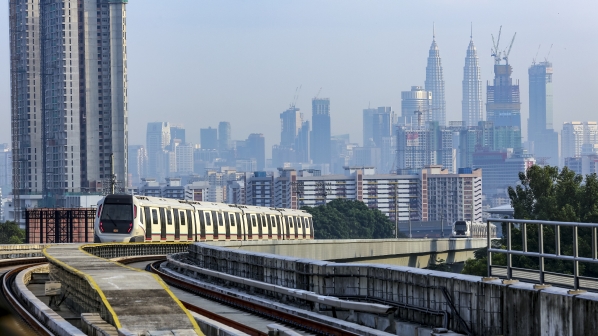 ISSUED in 2017, the Asian Development Bank’s Strategy 2030 aims to support a prosperous, inclusive, resilient and sustainable Asia and the Pacific. While significant strides have been made in helping to reduce poverty and stimulate economic growth in the 53 years since the multilateral development bank was founded, ADB hopes the new strategy will expand this vision and continue its commitment to the region.

While rail does not appear specifically in the document, the emphasis on developing liveable cities, regional integration and cooperation, and tackling environmental and gender issues are conceivably transferable to rail projects, according to Mr Rüdiger Zander, senior railway specialist at ADB.

Rail could then be set for a major boost across the region as these plans take shape in the next few years. “When it comes to sustainability and environmental issues, liveable cities, regional cooperation and integration, rail projects are certainly top of the list to address these issues,” Zander says.

ADB has lent an average of e1.5-2bn annually towards rail, metro and light rail schemes in recent years. However, Zander envisages this increasing substantially with several huge projects in the pipeline.

“I wouldn’t say that our strategy is producing increased interest from governments, it is trying to adapt to what governments are looking for,”

In particular he foresees demand from the Philippines, for metro projects in India, and in Southeast Asia. Recent political changes in Malaysia altered the scope of several very large projects here; Kuala Lumpur - Singapore high-speed and the East Coast Rail Link in particular, which may now leverage ADB financing. Thailand is also expected to increasingly require project finance.

“I wouldn’t say that our strategy is producing increased interest from governments, it is trying to adapt to what governments are looking for,” Zander says. “There is a significant increase in demand for rail projects. Rail was completely neglected for decades in most of these countries apart from China which has been investing in its rail network for 20 years. The rest of Asia was focusing on road and the consequences are obvious: congestion and environmental issues and so on. I think rail is really reviving but generally Strategy 2030 was not developed to tackle rail issues but big global topics.”

ADB also has a role to play in central and west Asia. While many of these vast but sparsely-populated countries possessed excellent rail infrastructure during the Soviet era, Zander says several areas have been neglected over the past 30 years. However, this is a good base for development. “What we normally do in central and west Asia is usually refurbishment and new rolling stock, or it can be an electrification project,” he says. “There are not many new projects so mainly it is support to bring the old existing railways close to where they have been in the past.”

For example, ADB announced a $US 170m loan to finance the modernisation of Uzbekistan Railways’ (UTY) fleet and maintenance facilities in May. ADB is also financing electrification projects in the country and issued a $US 2m grant in January to support the development of railway strategies and institutional capabilities in the Central Asia Regional Economic Cooperation (Carec) countries.


“This is probably one of the biggest problems in south and Southeast Asia,” Zander says.

Similarly, ADB is providing $US 750m in long-term financing to support Indian electrification projects and announced plans last month to provide $US 160m to fund railway efficiency improvements in Sri Lanka. However, in southeast Asia, countries are hindered by the limitations of existing infrastructure: metre-gauge networks built in the late 19th and early 20th centuries, which are largely beyond the point where refurbishment is an option. Right of way is also a major issue in this region as these typically have not been maintained to a suitable standard or suffer from encroachment. “This is probably one of the biggest problems in south and Southeast Asia,” Zander says.

As a result, major new infrastructure projects are often the only means to improve transport. However, recent experience shows finance for these schemes alone is insufficient. For example, in Bangladesh, a country where ADB has a long history of supporting infrastructure projects - including with Bangladesh Railways (BR) - Zander says there is a growing emphasis now on providing institutional and technical support. It is a similar scenario in other countries where the level of technical knowledge or the culture of a particular institution inhibits making the most of new infrastructure that is built.

“Maintenance has been neglected in Bangladesh over many decades,” Zander says. “The country was loaned a lot of money to build new infrastructure, and while they are still building, what they built 10 years ago may already need complete refurbishment. This was not properly addressed in the past and this approach needs to change. However, you cannot change the cultural or organisational things in a year or two. This is a long-term programme.”

As part of these efforts, ADB is set to increasingly support operation and maintenance projects. Zander says that many governments with metro and light rail systems have soon realised after these systems are up and running that they cannot operate them as intended because of the huge cost of doing so. “Assets get worn and things get worse, asset costs increase to the point where the whole thing is no longer economically viable,” Zander says. “This is one area where governments ask ADB for support. There is also a focus on this in new projects and this is set to increase in the future.”

Zander adds that ADB can also identify improvements to existing infrastructure to help metros realise their potential - whether this is changing station design at multimodal and transfer stations to better facilitate passenger flow, or upgrading the signalling system to reduce headways between services.


“ Rail is the most attractive option for a transport corridor and for the development of the transport backbone of an urban transport system.”

Reusing existing infrastructure or rights of way is often preferred so a project can come online faster than it might if it was a true greenfield scheme. This is particularly relevant in many cities which are growing extremely fast, meaning a metro project which may take 10 years to mature may not be relevant when it finally comes into service. However, Zander is clear that the situation is very much dependent on the individual city with no out-of-the box solution available.

“Rail is the most attractive option for a transport corridor and for the development of the transport backbone of an urban transport system,” he says. “However, it is difficult to plan and implement based on the conditions we have today. Many Asian cities are growing massively and many middle-income people cannot afford to live in the city centre. I think there is a huge requirement for regional rail and inter-city railways, but at the same time they have to develop metro lines. The governments are quite clear about this and they know that they cannot look at the road sector anymore. There are going to be huge investments but there are also going to be challenges, particularly in cities because of issues with right of way in dense urban areas.”

ADB’s role in supporting governments extends beyond simply acting as a financier. Through its network of 31 field offices, it remains in constant dialogue with governments and their finance ministries in all manner of fields; transport after all accounts for only 25% of ADB activity and rail around 25% of this figure.

Zander says ADB’s role in a project can vary from becoming involved at an early stage and consulting to arriving at the optimal solution to a particular problem, which Zander says is the preferred scenario. On the flip side, he says ADB is often approached to support an ongoing project, which can be very good. However, there are situations where ADB is approached and it is not possible to secure an approval because the project is not sustainable and there are severe environmental or social issues.

“If there is a loan going out, there has to be some kind of change in the country,” Zander says. “This is the kind of ADB value that we can bring in. If some governments want to borrow money from ADB, they know what they are dealing with. Some governments even approach ADB with some institutional reform in mind, so it works both ways.”

Of course, ADB finance can only go so far to meet Asia’s substantial infrastructure deficit. According to an ADB study published in 2017, Asia needs to invest $US 26 trillion between 2016 and 2030, or $US 1.7 trillion per year, if it is to maintain its current growth momentum, with transport accounting for $US 8.4 trillion of this figure. However, Asia currently suffers from a 2.4% infrastructure investment gap of projected GDP, rising to 5.5% if China is excluded.

Inevitably the bank works alongside other financial institutions when supporting particular projects, which require compromise and understanding. Indeed, many of the upcoming projects that might benefit from ADB’s support fall within the remit of China’s Belt and Road strategy, particularly in Southeast Asia. Zander says “it is not a black and white” situation, where this is China and this is others, but again a cooperation. This reflects the coordinated approach of some banks as well as an overseas development agency such as the Japanese International Cooperation Agency and the Korea International Cooperation Agency, which unlike ADB, require the use of particular suppliers.

Yet there is a major caveat which often clouds long-term planning: elections. “New governments come in from one day to the next, and for whatever reason, they don’t want the programme the previous government was following,” Zander says. “This is nothing to do with developing countries. It is the same in the so-called developed countries where they get a new president and they are trying to cancel all of the agreements that the previous government arranged.”

While some projects may fall by the wayside, the general trend it seems is for an upturn in investment. As environmental concerns increasingly drive political agendas and cities try to tackle congestion, rail is considered a solution to these issues in Asia, potentially providing the industry in the region with a major shot in the arm in the next few years.