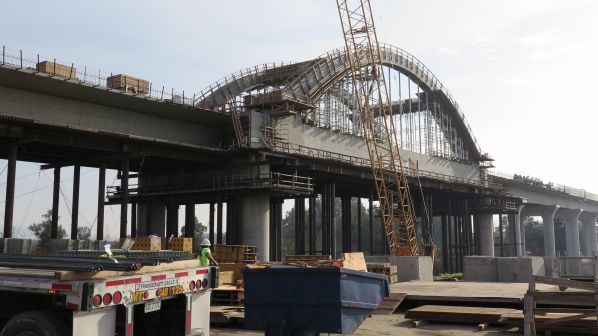 The under-construction California high-speed project has had a difficult time.

GIVEN the United States’ geography, with large city pairs separated by open spaces and approximately 320-480km apart, the country initially appears to be well-suited to the development of a high-speed passenger network. However, while there have been ambitious plans over the years to build new lines, this has so far failed to materialise.

Mr Norman Anderson, CEO of international advisor CG/LA Infrastructure, says the key to unlocking these projects could be in the way they can create wider value.

Anderson points to California and Texas as examples of two high-speed projects in the US with differing approaches to value creation.

The 320km/h Dallas - Houston Texas Central high-speed line is due to begin construction in the first half of the year after receiving the final Rule of Particular Applicability (RPA) and Record of Decision (ROD) from the Federal Railroad Administration (FRA) in September 2020. When completed, passengers will be able to travel between Dallas and Houston - with an intermediate station in the Brazos Valley near Texas A&M University - in less than 1h 30min.

The under-construction California high-speed project has had a more difficult time. The project, launched in 2012, was originally designed to connect San Francisco and Sacramento with Los Angeles and San Diego. However, in February 2019 the governor of California, Mr Gavin Newsom, announced that the project would be scaled back due to spiralling costs and poor oversight, and only the section currently under construction in the Central Valley will be completed.

“I don’t understand why in the US, everything has to be publicly funded,”

While he describes Texas Central as “a wonderful project” that “might be something that Biden will find attractive” to invest in, Anderson says the California project is “possibly the dumbest project in the history of dumb projects.”

“I don’t understand why in the US, everything has to be publicly funded,” he says. “You get really ugly, cheap stations without a store anywhere near them. But if it’s a private project, all of a sudden you’ve got to figure out how to capture value, and people’s brains get to work, and they start to get creative.”

There appears to be scope for more of these projects to pop up across the country. Brightline has identified 11 corridors that are “too short to fly, but too long to drive” - what it considers as the sweet spot for high-speed rail including Las Vegas - Los Angeles. The US High Speed Rail Association has also proposed a network of high-speed lines.

However, Anderson is of the countercultural view that there are a lack of city pairs in the US that could be well connected with high-speed rail. “We struggle to find city pairs… because it’s just such a big place,” he says. “They’ve suggested Chicago to Springfield, but that’s not a pair - it’s only half a pair. And they want to go on to St Louis, but St Louis is a dying city. It doesn’t make any sense.”

Anderson still foresees growth for inter-city rail through increased investment in Amtrak under president-elect Mr Joe Biden. “Biden’s a lover of Amtrak, he is a train lover, and as a result we tend to believe that they’re going to get funding to not just improve Amtrak but also address some of the fundamental infrastructure issues like the tunnels in Baltimore and the Gateway project,” he says.

The lessons on value capture from the Texas Central project might help to breathe life into transit networks across the country.

“It’s the same sort of weird dynamic where you’re building on the cheap, rather than optimising value,” he says. “A modern rail project is value optimised - you’ve got to figure out how to do that. We’re just starting to come to grips with the fact that we’re resource constrained, whereas the rest of the world has been resource constrained for about 50 years so are much more creative in terms of coming up with all sorts of different alternatives to finance projects.”

In order to solve this, Anderson proposes three changes in the way that urban projects are procured and built.

The first is to do away with the model of creating a single contract for the project, such as a design, build, operate, maintain contract, which is then awarded to a single company or consortium. Instead, Anderson suggests cities “carve it into pieces and figure out how to get the private sector as involved as possible,” as he believes this allows various bidders to optimise each section of the project.

“I would argue that there are features of the freight rail model that you have to adopt for transit, and value capture is a piece of it,”

Anderson also believes that projects should be designed “technology heavy, rather than technology light.”

“You’re actually producing an enormous amount of value because you’re recognising the value of the network, rather than seeing it is something to be built on the cheap,” he says. “What’s happening with technology is it’s going to have software that can be upgraded every year. So every year, you’re going to get new performance enhancements.”

The third change is the development of skills within the public sector to optimise and oversee project performance.

“I think we’ve got to revitalise the public sector, we need to train these guys and give them a sense of the importance of private investment, but also the tools to manage the private investment so that what’s agreed to in the contract can be efficiently adhered to.”

Anderson says a new funding model needs to be developed for transit that doesn’t simply rely on state or federal funds in order to operate, and Anderson says there are also lessons from the freight sector that could be transferred to transit.

“I would argue that there are features of the freight rail model that you have to adopt for transit, and value capture is a piece of it,” he says. “Modernising the networks, ensuring services are reliable and balancing the timetable to meet demand could also play a part in reviving the sector. Leasing rolling stock instead of owning it could also play a part in ensuring the fleet is regularly renewed, and using space within stations could not only generate additional revenue, but also breathe economic life into the areas surrounding them.”

As the United States prepares for the change in executive leadership from Trump to Biden, a major question is how the latter’s plans for infrastructure will vary from the former’s, and what the new president will prioritise. During the election campaign last year, Biden promised to spark the “second great railroad revolution,” which would ensure “America has the cleanest, safest, and fastest rail system in the world - for both passengers and freight.” Meeting this promise requires a huge amount of work.