The Covid-19 crisis did not dampen demand for new railway and transit projects across the world but challenges to effective delivery remain, as Systra CEO Pierre Verzat explains to Kevin Smith. 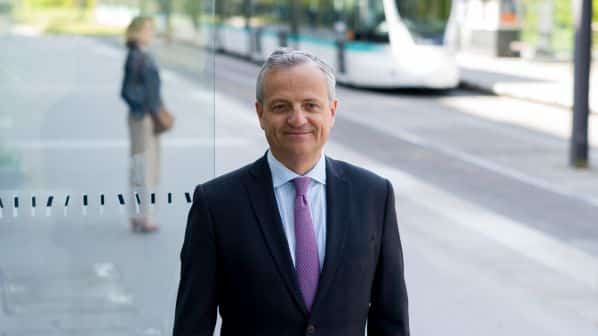 Undoubtedly the fallout from the Covid-19 pandemic is continuing, as shown with ongoing supply chain issues and high levels of inflation. Yet as CEO, Mr Pierre Verzat, points out, the pace of overall railway project development remains unabated.

Verzat says the Covid crisis “was not too harsh on us.” Teams moved to working from home, clients also adapted, and while the difficulty of visiting sites did pose some problems, work was able to continue.

“We don’t see any change in the pressure in the market, even with the war in Ukraine," Verzat says. “It is impacting things locally, but elsewhere in the world the pace is not slowing.

“In Asia, India, Australia, Canada, even Britain with HS2, they know that beyond this crisis they will still need to move people and goods safely and without any carbon emissions.”

“We don’t see any change in the pressure in the market, even with the war in Ukraine."

The high cost of raw materials will inevitably lead to cost increases and delays to delivering projects as budgets become stretched, Verzat says. Although his experience of the market is of governments and authorities having an attitude of doing “whatever it takes” to deliver.

Inevitably there are variations. In Europe, Verzat says that France is restricted to metro and light rail projects. The Nordic countries are “spending a lot” while Italy is coming back. He is buoyant about prospects in Canada and Australia along with continuing investment in India and Saudi Arabia. There are, though, question marks over Africa where “there are many ideas but not so much money.” He also sees China becoming more cautious here compared with the past “when they were offering incredible prices.” South America remains difficult while the United States is a question mark. “Since Obama, we have been waiting for the money,” Verzat says.

Systra does draw a line in the sand of where it will and won’t do business, according to Verzat. Mexico is one example where it no longer operates due to a lack of transparency. Similarly Iran, while possessing highly competent engineers, is another location where corruption is common and it is difficult to do business.

“Systra has a long history, 65 years, working in 150 countries,” Verzat says. “We have been everywhere, and we are proud of that. But there are many countries where the conditions for competition are not clear, the investment is not justified, or the level of corruption is too high.”

In other areas, the level of investment and pipeline of projects is lacking. Central Asia is one region where European firms had a high level of interest but there is now a lack of projects and certainty of government commitment. In other countries, such as Algeria and Nigeria, where Systra did commit resources, promised projects failed to materialise. This contrasts sharply with Egypt, a current industry hotspot, where the government is firmly backing rail and transit projects.

“It is not just about working on one project and then moving to somewhere else," Verzat says. “For infrastructure we need scale and continuity. We need to offer our full suite of services, and for that we need volume. If we don’t have that, we are less present.”

Verzat says that while it is “very conservative,” the railway industry is slowly but surely waking up to the opportunities offered by digital technologies and digitalisation.

Verzat spent a portion of his career in the aerospace sector where he says Building Information Modelling (BIM) was introduced “in the last century.” It is now becoming more prevalent in rail - Verzat says that Systra now uses six, seven or eight dimensions in its BIM. “We have developed Carbon Tracker where we can adjust the design of the BIM model to reduce the carbon footprint of the project,” he says.

Verzat adds that “the dream” is to develop a full digital twin of the railway that will benefit the construction phase as well as operation and maintenance. He says that while this has technically been possible for many years, only now the will to do so is growing.

Inevitably greenfield projects provide an opportunity to instil these functions within the working culture right from the beginning, ending the need for paper records and greatly improving working efficiency.
Artificial Intelligence is another area that Verzat feels can contribute substantially to improving design modelling for projects. “We are only at the beginning because the link between BIM and asset management is not completely established,” he says.

While new technologies offer significant opportunities, Verzat says recruitment remains the sector’s biggest challenge. “In many countries, the rail industry is not very attractive,” he says. “It is not aerospace, it is not IT, it is not the new world.”

Verzat says rail is struggling to recruit civil engineers. While construction can still attract the best and the brightest in Africa and the Middle East, systems, telecoms and IT are all proving more appealing fields elsewhere. In general, though, the lack of senior experience is the toughest challenge and one that Verzat admits the sector will continue to struggle with.

“It is a business where, especially at senior expert level, you need top guns with 20 or 25 years of experience,” he says. “25 years ago we were working on far fewer networks in parallel. And that is the main challenge for the world as a whole: to have enough brains to manage the transformation. The sustainability challenge is significant.”