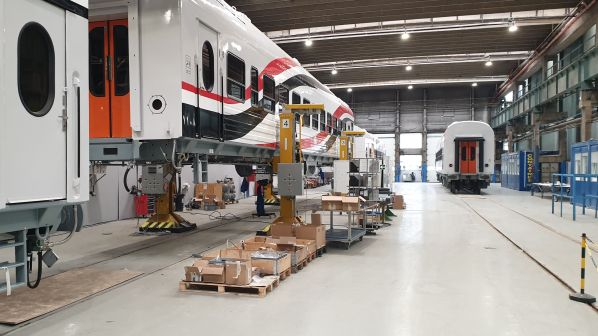 Assembly of coaches at the Dunakeszi facility is now underway
Photo Credit: TMH

EGYPTIAN National Railways’ (ENR) procurement of 1300 coaches of five different types from TMH Hungary under a e1bn contract in September 2018 was not just a landmark order for the railway, it was a major coup for the supplier.

Initial manufacturing of the coaches has taken place at Tver Carriage Works (TVZ), a subsidiary of Transmashholding (TMH), with production steadily shifting to the Dunakeszi Vehicle Repair site in Hungary, which was acquired by TMH and its Hungarian partner Magyar Vagon in June.

While meeting the contract’s localisation requirements, the move to Dunakeszi is also establishing a base for TMH in the lucrative European market. Dunakeszi is set to manufacture 680 of the Egyptian coaches and work is underway on assembling and fitting out bodyshells manufactured at TVZ ahead of shipping the first vehicles to Egypt by the end of the year.

Mr Terence Watson, TMH’s senior vice-president Europe, says that while Dunakeszi is an established and reputable renovation and maintenance facility, this process is very different from manufacturing - it is generally a lot slower, more static and takes up a lot more space.

TMH has therefore invested significant capital to update the facility through an extensive technology transfer process, helping the plant to become increasingly self-sufficient. At peak production, Dunakeszi will manufacture 25 coaches per month for ENR. However, the company’s business plan is targeting production of up to 50 coaches per month at the site with capacity to expand facilities if necessary.

Work so far has focused on renovating the biggest hall to serve the ENR contract while the other areas have been optimised in a process Watson says involved TMH International experts from Germany and Switzerland as well as specialist consultancy firms. “Together we have accelerated the plan,” he says. “Normally this would take a company a year to 18 months to complete, but we managed it in six months.”

TMH’s support for the facility was ratified by long-term Dunakeszi customer, MAV-Start. The operator agreed a €92m three-year maintenance and modernisation contract for 403 inter-city coaches used on domestic and cross-border services in August, which Watson says will satisfy Dunakeszi’s service activity base.

But TMH is not standing still. The company has just signed its first contract in Germany to maintain two large new fleets of regional EMUs for GoAhead in Bavaria, which will be maintained at a new facility. Watson says the company is also bidding for other service and rolling stock contracts, which will be awarded in the first half of 2021.

Watson adds that the company has been working carefully to see how the market develops and there are encouraging signs.

After decades of EU and national investment to improve infrastructure, he says demand is shifting to purchasing rolling stock. For example, there are ample opportunities in Hungary to supply EMUs to MAV-HEV, which operates the 1.5kV dc suburban network around Budapest, as well as coaches for long-distance domestic and cross-border services for both MAV and private operators.

“We made a huge inroad by simply doing what the customer asked us to do.”

The location of the site also means that upcoming contracts in the Czech Republic, Slovakia, Poland, Austria and Slovenia, which Watson says have not typically been served particularly well by established players, are within reach.

“We want to turn Dunakeszi into our leading facility for Europe” he says. “We know it’s a wrong strategy to go head on against all the big competitors. That’s not in our interest at all. We’re looking for the niches that work for us. There are more now than there were one year ago and certainly more than two or three years ago.”

A selling point for TMH, according to Watson, is the company’s versatility. Unlike other European manufacturers, it is not tied to the fortunes of a state-owned railway, which he says leaves it well placed to meet the needs of all customers, including private operators seeking affordable rolling stock or repair and maintenance services.

Watson emphasises his point by highlighting TMH’s work in South Africa and Argentina. In the case of Argentina, he says TMH created a business by returning a fleet of inoperable Chinese locomotives to service, which has since grown to further service and supply contracts.

“We made a huge inroad by simply doing what the customer asked us to do,” he says. “If an operator or a partner in Europe is interested in doing something, we will take a fresh look at it with a fresh pair of eyes. We won’t be blocked by corporate constraints.”

The coronavirus crisis is clouding the immediate future for many manufacturers as they wait to see what market emerges in 2021 and 2022. However, Watson believes the likely result is a rethink of how Europe operates its railway, including the provision of more cross-border services at the expense of cheap short-haul flights. This could offer a potential boom for some manufacturers according to Watson. TMH and Dunakeszi, it seems, are well placed to benefit.

“We think that railways and operators generally in Europe are open for newcomers to come up with new ideas about what risks the supply industry could take and should be taking right now,” Watson says. “It is time for new investment in new places. And that’s an area we’re looking at quite specifically in Western Europe, and I think it will bring us opportunities.”