A prototype power-electronic traction transformer know as Pett has been developed by ABB and is currently being tested in an electric locomotive. The objective is to develop a compact, lightweight but powerful and energy-efficient converter for use on multiple-units where space and weight are at a premium. 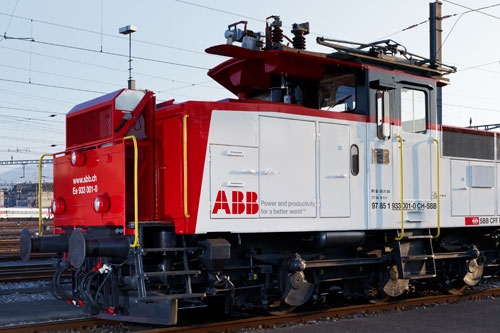 IT is often said that small is beautiful. But when it comes to technology, there are numerous reasons why small is better. In many applications weight and space requirements directly influence productivity, and much research goes into footprint reduction. Some products, however, have largely resisted this tendency.

The minimum size of a power transformer is essentially determined by the laws of physics, as the core must have certain dimensions to accommodate the magnetic field. Traction is a particularly challenging application for transformers, as the more space the transformer occupies, the less space is available for passengers. Its weight is also a factor in terms of permissible axleload and the additional energy needed to accelerate the train.

To make this component smaller and lighter, the laws of physics fortunately provide some scope for improvement in the form of frequency. The higher the frequency, the smaller the required core. But applying it to such large and heavy-duty items as traction transformers is about much more than scaling. To this end, ABB has developed a prototype power-electronic traction transformer (Pett) that is currently being tested in a locomotive.

In the early days of electric railways, dc was the most common power supply. As it was unfeasible at the time to step down dc voltages onboard the train, transmission between the substation and the train had to be set at between 750V and 3kV so that it could be fed directly to the traction motors. This had a major disadvantage in that the low voltage caused high conduction losses in the overhead line.

Later, single-phase ac electrification at 15kV 16.7Hz and 25kV 50Hz was introduced which reduced transmission losses, but with a penalty: the large and heavy transformers that had to be carried on the train. For historical reasons, railways today use a multitude of different electrification systems, often based on what was state-of-the-art when electrification first began in a particular country or area.

On locomotive-hauled trains, a heavy transformer is not necessarily a disadvantage as it contributes to adhesion. The maximum force that the locomotive can apply to haul a train without losing adhesion on the rails is limited by the weight of the locomotive.

In modern passenger trains, however, there is a trend towards multiple-units with distributed traction. With a higher number of powered axles, adhesion is no longer a limiting factor for acceleration, but the weight and size of the transformer remain a major constraint for train designers. An ideal train would combine the low weight and small equipment footprint of dc trains with the low transmission losses of high-voltage ac electrification. Essentially, the challenge lies in making the transformer lighter.

The power conversion path found in most modern ac trains is shown in Figure 1.

Current from the ac catenary flows through the primary windings of a low-frequency transformer (LFT) to the rail which provides the return path.

The reduced voltage available at the secondary windings of the transformer is fed into a four-quadrant line chopper converting it to dc-link voltage. An inverter converts this to variable-voltage variable-frequency (VVVF) ac for the traction motors. Auxiliary supplies can also be fed from the dc link.

by ABB features a series cascade of converter modules on the high-voltage side, with the outputs connected in parallel on the dc side. This topology makes the solution scalable and provides scope for redundancy (the "M out of N" system). The incoming ac from the catenary passes through a filter inductor before entering the first converter module. Each module of the converter consists of an active front end (AFE) block and a dc/dc converter block. The AFE block is essentially an H-bridge that regulates the charging of link capacitors. This

The cascade topology makes it possible to switch every module independently, allowing the switching patterns of the H-bridges to be interleaved. If they are interleaved evenly (ie offset by 360 degrees/N, where N is the number of levels), the grid side of the converter sees an apparent (equivalent) switching frequency that is 2 N times higher than the actual switching frequencies of the individual H-bridges.

This high apparent switching frequency, combined with the larger number of intermediate voltage levels, leads to a lower harmonic distortion than is possible with conventional traction converters, thereby reducing the need for input filtering.

Medium-frequency transformers provide galvanic isolation between the high voltage coming from the ac grid and the low voltage connecting the load, provide suitable voltage adaptation for the 1.5kV dc load voltage considering the 3.6kV intermediate dc-link voltage level, and help the IGBT (insulated-gate bipolar transistor) modules in the LLC resonant circuits to work in the soft switching mode. As overall size reduction increases the challenge from the dielectric point of view, this aspect has to be studied carefully.

In the Pett demonstrator, all nine transformers share the same oil-filled tank, as does the line inductor and the start-up charger.

Each of the nine medium-frequency transformers is a part of the associated dc/dc converter. By using the transformer's leakage and magnetising inductances and the external circuit's capacitors, a resonant LLC circuit is created (Lr, Lm and Cr). The advantages of an LLC circuit include:

• low-voltage stress and ZCS on the secondary side diode rectifier, and

As an LLC circuit is based on the principle of resonance, varying the switching frequency can control the output voltage. However, in the present Pett implementation, this has not been used and the LLC resonant dc/dc converter operates in the open loop with a fixed switching frequency of 1.75kHz, which is below the resonant frequency.

The control targets can be summarised as:

The hardware is ABB's ac 800PEC controller, a platform that integrates fast and slow control functions.

The existing Ee 933 traction transformer and GTO rectifier were removed to provide space for the new Pett cubicle, and some mechanical adaptations and electronic interface reworking was necessary to accommodate Pett.

The locomotive operates under 15kV 16.7Hz electrification. The pilot installation was completed in mid-2011, and certification by the Swiss Federal Office for Transport (FOT) was achieved by the end of the year, enabling the locomotive to start shunting at Geneva Cornavin station in February.

Pett has nine cascaded modules, eight for operations and the ninth for redundancy. The unit has 1.2MW nominal power and can supply 1.8MW peak for short durations. The dc output voltage is 1.5kV.

The overall weight is 4.5 tonnes, including cooling. Compared with traction transformers of the same power rating, Pett not only replaces the actual transformer but also the low-voltage rectifier. The main aim of the pilot is to study the feasibility of this technology.

Weight optimisation was an additional consideration. The power density (expressed in kVA/kg) of today's transformer and rectifier combinations is in the range of 0.2-0.35. Future Pett generations under development will exceed this by a considerable margin, achieving values of 0.5-0.75.

• improved energy efficiency from ac input to dc output from 88-90% to more than 95% compared with today's average efficiency of a 15kV 16.7Hz standalone traction transformer which is in the range of 90-92%

• reduced EMC and harmonics, and

All these factors make Pett ideal to provide a small, lightweight but powerful converter that can be accommodated on the trains of tomorrow, and is suitable for operation in close proximity to passengers.

As most large transformers tend to be stationary, traction is probably the application that stands to benefit most from reducing the transformer's weight, and hence the area where this innovation must occur first.

Although Pett is currently installed in a shunter, its real potential lies in multiple-units. Pett's compact size means it can easily be fitted under the floor of the train or on the roof, maximising the space available for passengers while reducing the train's power consumption.