With the emergence of new traction technologies, locomotives can be specified more closely to their intended use, as the expansion of Vossloh's G6 range demonstrates. 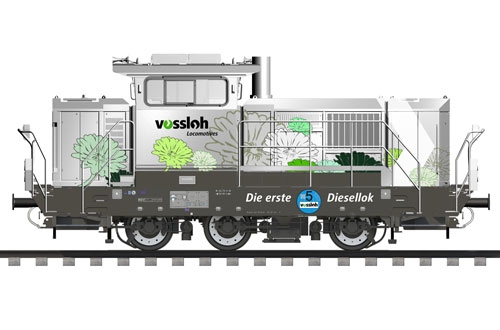 TRADITIONALLY the principal traction decision facing diesel locomotive operators has been between electric and hydraulic transmission, and opinions differ as to which is the superior option for mainline and shunting locomotives.

With the expansion of its G6 three-axle locomotive range, Vossloh is offering a flexible drivetrain configuration that allows operators to specify the locomotive best suited to their individual needs. Vossloh still offers the same basic platform for both diesel-hydraulic and a diesel-electric driveline, but now the customer can select their preferred power rating, driveline and energy sources – from diesel to hybrid storage units. Operating efficiency can therefore be fine-tuned because the modularity of the design allows inexpensive retrofitting and conversions.

The original G6 shunter, which debuted at InnoTrans 2008, weighed 60-67.5 tonnes with an output of around 700kW and a fuel tank capacity of 1800 litres. Since 2010, it has been certified for operation in Germany, and major operators are Verkehrsbetriebe Peine-Salzgitter and BASF.

The expanded range takes the basic modules of the G6 including underframe, frame, cab, brakes, and controls, but allows the customer to choose from a wide variety of newly-developed driveline options.

This will be achieved with the aid of standardised mechanical and electrical interfaces. In developing its modular concept for the G6, Vossloh acknowledged two conflicting factors - locomotives are designed for a long service life, but technology continues to change and advance. Vossloh aims to offer a range that accommodates technical progress, recognising that there will always be new developments, such as in electrical storage systems.

With the G6 serving as the engineering platform, this is now feasible, and the following configurations are being developed and tested:

• G6 Hybrid with a compact 350kW diesel engine/generator combined with an energy-storage module for traction, and

The locomotives have a maximum power rating of 700kW and starting tractive effort of up to 220kN.

The electric driveline design and testing has been carried out in-house by Vossloh. Last year a new test centre was opened at Vossloh's Kiel plant to validate the performance of driveline components under live operating conditions.

The development, engineering and testing of the new diesel-electric driveline has involved extensive cooperation between Vossloh Locomotives and Vossloh Kiepe Main Line Technology. This resulted in the decision to replace the hydrodynamic transmission used previously with a central traction unit controlled via a Vossloh inverter module mounted on the frame. The inverter, traction generator, and central traction unit have been engineered to match the operating cycles typically performed by a shunter. Many of the systems are redundant to maximise availability. The central traction unit has two electric windings and this is reflected in the configuration of the power electronics.

The inverter has been designed to allow future integration of power storage systems. The traction generator allows the locomotive to start up without component wear, meaning there is no need for a conventional starter. Likewise, there is no external battery charger because this function is taken over by the power electronic components. The various configurations share a high degree of component commonality.

The traction requirements of the operator were another key focus in the further development of the G6 range. Where operators previously chose from predetermined drivelines based on existing vehicle configurations, they can now select traction components to optimise the locomotive for specific types of operation.

Data gathered during tests with various G6 operators showed the duties performed by the locomotives varied considerably. Following analysis of this data, Vossloh has divided these operations into three distinct categories: shunting and distribution; heavy shunting; and haulage at a specific location. Depending on the work, various drivelines are recommended. For example, heavy shunting is normally accompanied by long periods of idling and limited full-throttle cycles. We recommend a multi-engine or even a hybrid locomotive for this type of operation, but operators should consider fuel range and working hours as well as the degree of flexibility required.

The most popular G6 driveline option may cover many different types of work but might not be the most cost-effective solution for an individual user.

An important aspect of traction module selection is the cost of energy, and on-demand performance is critical to optimising energy usage. The less a vehicle is designed for general-purpose operations, the greater the possible fuel savings. However, adopting such a solution may also result in severe operational constraints.

At first sight, hybrid locomotives are often an enticing option, but they are saddled with necessary and expensive electricity storage systems, and the long-term performance of these technologies under often-rigorous shunting conditions has yet to be proven. Other criteria include local operating conditions. If, for example, the location requires zero emissions, it may be necessary to opt for a battery locomotive. Often operators seek locomotives with a long fuel range and the capability to perform more than one type of duty.

Capitalising on the experience gained so far, Vossloh has developed a three-axle locomotive fitted with two small diesel engines each rated at 350kW and sourced from the commercial road vehicle industry. Thanks to their family background, these engines can deliver a performance characterised by low fuel costs and emissions on a par with the Euro 5 standard for lorries. In addition, an automatic start/stop system further enhances fuel efficiency, especially for small diesel engines combined with the calibrated electric driveline.

Other benefits include the diesel engine's cold-starting properties, improved responsiveness and a performance that matches traction demands while reducing the amount of time the diesel engine is in operation which, in turn, extends maintenance intervals. Maintenance costs on the multi-engine systems are very modest compared with those of hybrid technologies. Fuel consumption during shunting operations has been cut to around 9 litres per hour of locomotive operation.