A MAJOR expansion of Kuala Lumpur's urban rail network is underway as the Malaysian government pursues its master plan to tackle the growth in car journeys and congestion by quadrupling public transport's market share by 2020. 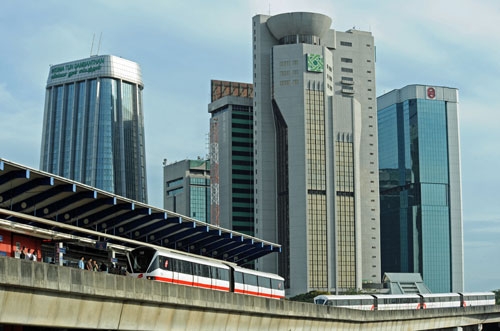 Extensions to the two existing light metro lines are due to open later this year, while work is starting on a new 51km heavy metro line. Two more lines are planned which would add another 100km to the network.

The 31-station line known as 'My Rapid Transit' is due to open in 2016. It will run from Kajang in the southeast through the heart of the city to Sungai Buloh in the northwest, and will connect with all the existing metro, monorail, and commuter lines. The line will have capacity for up to 440,000 passengers per day and will bring around 1.2 million residents within reach of the transit network.

The line will be underground in the city centre and elevated at each end. Preparatory works have started with utilities diversion around KL Sentral station and preparations for tunnel entrance sites at Cochorane and Semantan. Two contracts for viaduct works were let to Malaysian firms in January. IJM Construction won a Ringgits 974m contract for the Maluri Portal - Plaza Phoenix section and Ahmad Zaki was awarded a Ringgits 764m contract for the Plaza Phoenix - Bandar Tun Husein Onn section.

On March 24 the MMC-Gamuda Joint Venture secured the crucial underground package for the line. Worth Ringgits 8.2bn, it is the largest portion of the Ringgits 30bn expansion project. It involves designing and building 9.8km of tunnels plus seven stations.

One controversial part of the scheme has been the section of the route passing under the Chinatown to reach Pasir Seni station. To enable work to go ahead, businesses on Jalan Sultan and Jalan Petaling will have to vacate their buildings for six months before returning once construction is complete. Despite assurances that no buildings will be demolished and that compensation will be paid, the plans have led to demonstrations, through fears that tourism and trade will be damaged in this historic part of the city.