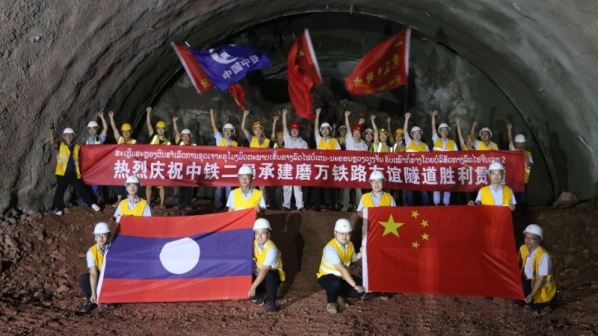 The tunnel in northern Oudomxay province was excavated through tough geological conditions, China’s Xinhuanet news agency reports, including four fault zones. CRECGZ also had to adapt to the coronavirus pandemic, including purchasing more locally-produced materials such as sand, gravel and cement, and hiring more local staff.

Construction of the tunnel began in May 2017.

The breakthrough follows the completion of the 9.5km China-Laos tunnel in May, which included 7.1km in China and 2.4km in Laos, as well as the 15.2km Ganzhuang tunnel in Yuxi, southwest China, in May, which will provide a connection to the China-Laos railway.

The China-Laos Railway is a strategic project under China’s Belt and Road Initiative and Laos’ strategy to transition from a landlocked country to a land-linked hub.

The 414km electrified passenger and freight line will run from Boten on the China-Laos border to the Laotian capital Vientiane, with an operating speed of 160km/h.

The project began in December 2016 and is scheduled to be completed in December 2021. Tracklaying commenced on the Laotian section in March.