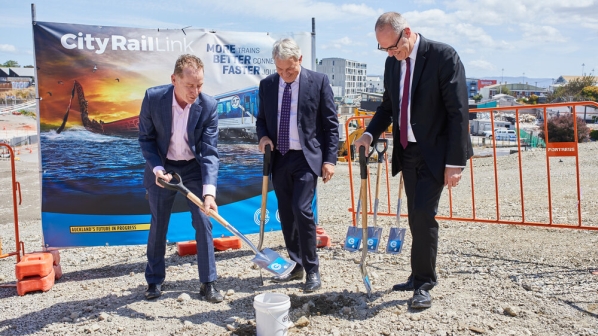 The ceremony clears the way for work to begin to drive 66 concrete piles between 8m and 38m-long into the ground to support a 127m-long, 25m-high curved retaining wall for the portal. The portal, which will take 10 months to build, will be the launch pad for a tunnel boring machine (TBM) which will make two separate journeys under Auckland from Mt Eden to Aotea in the city centre.

Herrenknecht, Germany, has been awarded a $NZ 13.5m ($US 8.7m) contract to build the TBM, which will be constructed at the company’s factory in China and shipped to New Zealand in sections before being reassembled in front of the portal. The TBM will start tunnelling in February 2021.

The $NZ 4.4bn scheme, New Zealand’s largest infrastructure project, will see the construction of a 3.4km underground line beneath central Auckland, transforming Britomart into a through station and increasing capacity on the Auckland rail network.

CRL Ltd, the company overseeing the project, has launched a competition open to the public to select a name for the machine. “The Tunnel Boring machine will help create huge changes for Auckland’s future and it deserves the name of an amazing woman who, equally, has had an enormous impact on our country,” says CRL Ltd CEO, Dr Sean Sweeney.

The ground breaking caps what Sweeny calls “a breath-taking 12 months” after the collapse of CRL contractor PCR Tomlinson, which went into administration in November 2018.

“Far from a setback, that collapse was the catalyst for big and rapid change inside the project and we are now celebrating the benefit of those changes - a CRL team that includes the best expertise from New Zealand and overseas that’s ready to deliver the next big step of an outstanding project for Aucklanders,” he says.